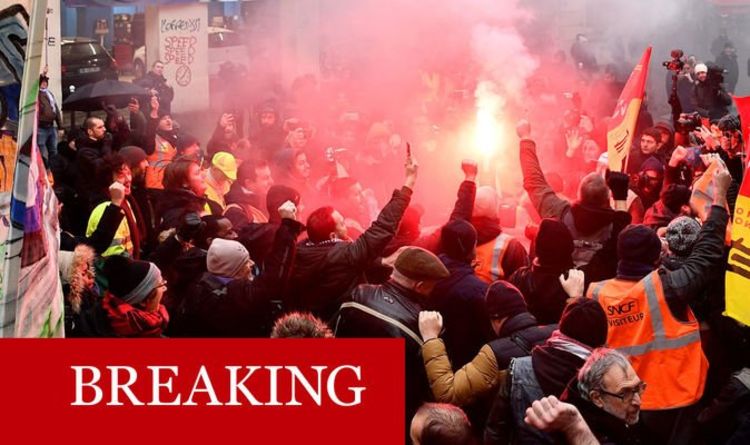 Protestors in Paris have taken to the streets in huge numbers, with police gathering. Photographs from the scene show huge numbers of protestors, some carrying smoke flares. Tempers boiled over throught=out France, with police firing tear gas at protesters in the western city of Nantes.

Today the CGT union said there would be no break in transport strikes over the Christmas period unless the government backed down on pension reform.

“The strike continues until we are assured that the current system is maintained and negotiations are underway to improve it.

Mr Brun warned the transport strike “will last a long time” as “dialogue (with the Government) is stalled as long as it maintains a reform that no one wants.”

The National Syndicate of High School Teachers warned today it was “stepping up” its actions against the reforms it branded “unacceptable” with fresh protests across major French cities.

Prime Minister Edouard Philippe said on Wednesday French people needed to work two years longer to get a full pension, drawing a hostile response from trade unions who said they would step up strike action to force an about-turn.

But he did appear to show some flexibility to the unions, pledging that those who were born in 1975 would be exempt – a longer period than the 1963 initially mooted.

Under the new pension rules, the Government has said it would guarantee a minimum pension of €1,000 per month for those who worked a full career.

It has pledged those who had part-time jobs or were temporary workers, such as couriers or office cleaners, would earn pensions for every hour they worked.

But many French people and unions taking part in the widespread strikes fear the new system will force people to work longer for smaller pensions.

The Government has insisted the changes would ensure the current pension system is “fair and sustainable” in light of a growing French population with a record number of people over the age of 90.

Transport workers have been on strike since December 5, causing heavy disruption to most of the public transport services.

Millions of commuters have found themselves trapped in hundreds of miles of traffic jams or crowded platforms and long waits on the few train lines running with a reduced service.

On Wednesday, only a fifth of high-speed trains were running. Most of the 16 metro lines in Paris are closed with only two driverless lines running a normal service.

Railway operator SNCF warned of “heavily disrupted traffic” for today, reviving memories of the three-week strikes over pension reforms that crippled the French transport network in 1995.

This forced then Prime Minister Alain Juppe to resign after he dropped a retirement reform plan and a programme of welfare cutbacks.

The continued strikes are the latest blow for President Macron, who saw his approval rating drop for a third consecutive month in December.

Just over a third (35 percent) of those surveyed said they were satisfied with his actions as France’s President – down three points in three points, according to the Ifop Fiducial poll for weekly magazine Paris Match and Sud Radio.