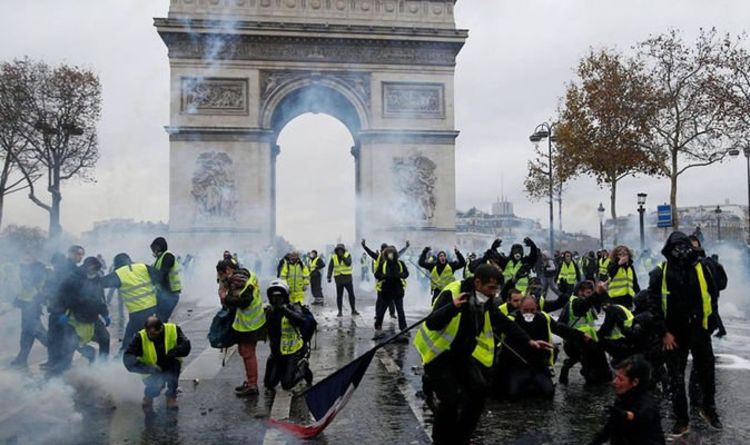 The clashes came on the 45th day of a strike against the government’s planned pension overhaul that has plunged scores of commuters into travel chaos for more than six weeks. Protesters shouted slogans denouncing police violence, President Emmanuel Macron’s arrogant rule and his controversial pension reform that has sparked the longest transport strike in decades.

Mask-clad rioters chanted “revolution,” “the street is ours,” “Macron traitor” and “Macron we’re going to come for you” as police attempted to subdue the crowds.

Sixty people were arrested during the protest following clashes with riot police, a spokesperson for the Paris police prefecture said on Sunday.

But there were also allegations of police violence after a video shot by AFP TV showing a police officer beating up a protester was shared online. In the footage, the officer is seen repeatedly punching a young man who is pinned to the ground and covered in blood.

The Paris prosecutors’ office said on Sunday that an investigation had been launched to determine whether “intentional violence by a person in a position of public authority” had been committed.

Saturday’s unrest came on the 45th day of gruelling transport strike against M Macron’s planned pension overhaul that has caused misery for millions of commuters in and around Paris in particular.

However, trains are finally becoming more frequent and Paris’ RATP metro drivers voted to suspend their action from Monday.

The yellow vest crisis erupted in November 2018 over planned fuel tax hikes but rapidly morphed into a violent anti-Macron revolt.

While the movement had all but fizzled out in recent months, the weekly rallies have been given fresh momentum by those opposed to the pension reform.

The hardline unions behind the strike action have joined forces with the yellow vests, who have repeatedly accused M Macron of implementing economic reforms that favour the urban elite over the struggling working class.

M Macron wants to merge the country’s 42 sector-specific retirement schemes into a single, points-based system he says will be fairer and help plug a chronic deficit.

But French workers who benefit from a special retirement deal – such as the right to retire in their early fifties – are objecting, and a wide variety of workers are against any attempts to raise the legal retirement age of 62.

The hard-left CGT and FO unions argue that the changes will effectively force millions of people to work longer for a smaller pension, and have called for the reform to be dropped altogether.

But M Macron has shown no sign of caving in to their core demand that he ditch his pension plans.