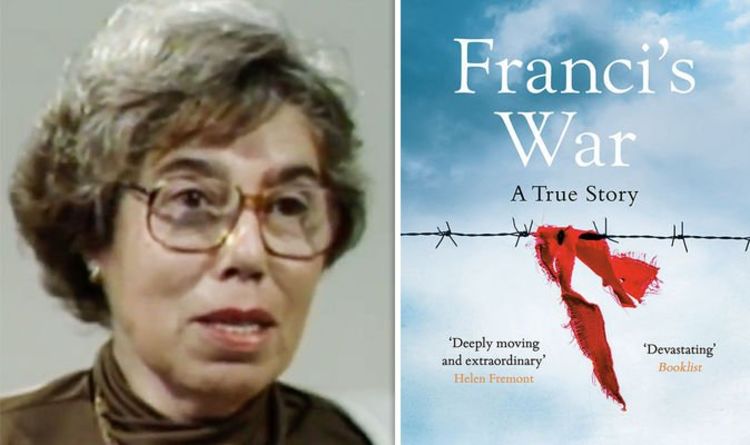 It’s well-known that the Nazi Holocaust resulted in the deaths of millions of Jews and other minorities. Yet the scale of the atrocity can make it overwhelming and hard to understand, which is why first-hand accounts by ordinary people who were caught up in it like Franci’s War are so important and effective. Franci’s War is a unique memoir of a spirited individual who loses everything, faces singular evil and suffering and emerges to begin life anew.

Franci Rabinek Epstein starts out just like any other nineteen year-old in the late 1930s.

But quickly her world changes forever with the invasion of the Germans and her deportation to the Jewish ghetto Terezin.

Over the next three years, she moves from one Nazi concentration camp to another, including the now infamous Auschwitz-Birkenau and Bergen-Belsen.

The reader is brought face-to-face with images of the Holocaust – which have since become sinister symbols – as Epstein really saw them.

It’s the yellow stars on the sleeves of Jews. The railway carriages stuffed full of frightened prisoners.

And it’s the gates of Auschwitz with their haunting words “Arbeit Macht Frei” (“work sets you free”), and emaciated crowds assembled outside concentration camp huts for the daily name-call.

Through her consistently clear and succinct description, the reader experiences the traumatic scenes Epstein witnessed – such as the heart-rending last moment she saw her parents alive, as they “walked away from me [and] never looked back”, and the sight of “forty thousand people who looked like corpses and thirteen thousand unburied real corpses” in one quadrangle at Bergen-Belsen – almost as vividly as she did.

Yet despite the horror, Epstein shows readers how, in the midst of extreme hardship and danger, ordinary people like her adapt to survive.

She’s brave too, lying to the face of the Nazi officer Dr Joseph Mengele that she is an electrician to save herself from being sent to her death at Auschwitz.

Full of awe and admiration, Epstein prompts readers to ask one haunting question of themselves.

If they had lived during the Nazi Holocaust, how would they have coped?

Female characters and the author’s relationships with them, notably with her cousin Kitty, are sources of comfort and support for Epstein throughout her ordeal and beyond, and at times it seems like all she has left are the women in her life.

It’s almost as if Epstein may be making the point that, while the world is torn apart by the masculine chaos and brutality of the Second World War and the Nazi machine, it’s women who stay strong, keep going and, when it’s all over, resiliently put the world back together again.

Franci’s War deserves the status both as a valuable historical source and as a stand-out memoir of one woman’s human experience of arguably the most abominable period of modern times.

Just days away from the 75th anniversary of the liberation of Bergen-Belsen by the Allies and as the Nazi Holocaust begins to fade out of living memory, detailed, gripping and accessible first-hand accounts of what it was really like to live through like Franci’s War are now more important than ever.