Frank Gehry Now Begins Every Day With a Swim: 'I'm Only 91' 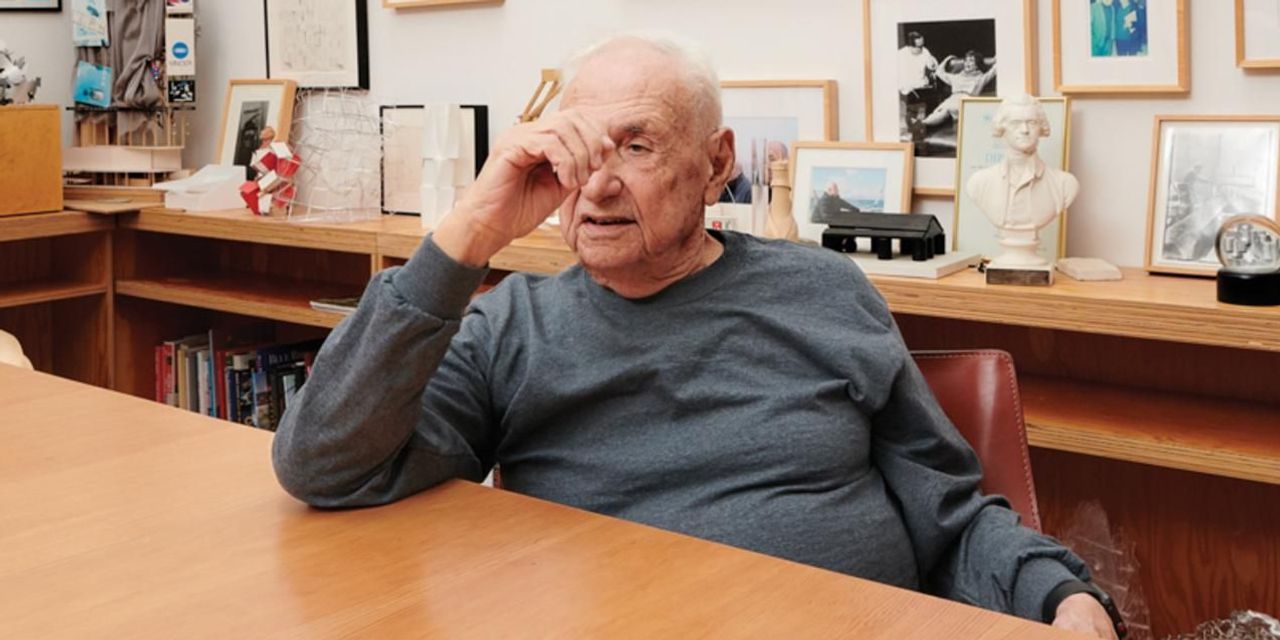 In our series My Monday Morning, self-motivated people tell WSJ. how they start off the week.

Even more than most of us, the Pritzker Prize-winning architect Frank Gehry has become a bit of a hermit these days. During the pandemic’s early stages, his wife, Berta Isabel Aguilera, contracted Covid-19 and made a full recovery. He’s still not leaving his Los Angeles home very often though. “It’s a scary, scary thing we’re all facing together,” he says. He has both a pool for exercise and a couple of cultural projects that are taking him outside his comfort zone. “It’s good to have things that you can work on that are positive, that are exciting and that you can still make in real time,” he says.

Known for his deconstructivist style and use of corrugated metals, Gehry, 91, has designed such iconic buildings as the Walt Disney Concert Hall in Los Angeles; the Guggenheim Museum Bilbao in Spain; and the Louis Vuitton Foundation in Paris. His work on the latter, with LVMH chief executive Bernard Arnault, led to a smaller-scale project he released last week: a limited-edition bottle and a decanter he designed for Hennessy X.O, commemorating the cognac’s 150th anniversary. The bottle retails for $ 200 and the decanter, inspired by the desk Gehry made out of chunks of glass for a 2012 Chicago project, is going for $ 17,000.

Here, Gehry speaks to WSJ. about what he eats for breakfast, his work on transforming the L.A. River into a public park and why he thinks more architects should embrace the practice’s ties to art.

How do you usually start your Monday mornings?

During this Covid thing, I’ve been swimming. I get up and swim half a mile every morning right away. It seems like I could go longer if I wanted to. It’s changed how I feel about the day. I feel very good. In normal [times], without the lockdown and stuff, it would be harder to start a regime like that. But now that I started, I intend to keep it. I’m only 91.

What do you eat for breakfast to start the week off right?

Well, I just have yogurt and fruit and a couple of fried eggs. Nothing very scintillating. I read the newspaper and read all about that bad guy, you know who I mean. And so that gets me a little upset for the day.

How has the pandemic affected your work and work schedule?

I haven’t been able to go to the office [much], I go a little bit. We have 170 people working online and we’re keeping them gainfully employed and paying their salaries, so I’m really pleased we can do that.

I’m working on two projects that are way outside my norm. One is [the set design for] a jazz opera with Wayne Shorter [the saxophonist and composer] and Esperanza Spalding [the jazz bassist, singer and composer] based on Iphigenia [the character in Greek mythology] and I have no idea what I’m doing, because jazz is unpredictable. Wayne says you can’t rehearse what you haven’t invented yet. And I love that. I can’t predict whether it’s going to be successful or a bust.

I’m very involved with the L.A. Philharmonic because I designed their building and they put me on the board. I don’t go to board meetings because they bore me, but I do help them with issues whenever something architectural comes up. Anyways, working with Gustavo [Dudamel, the music and artistic director of the Philharmonic,] has led me to get involved with some of his other madness. Again, I don’t know where I am. So I’ve got these projects that are in Never Never Land and whenever I feel comfortable about something, I go there and feel uncomfortable.

Then finally, the museum for the Guggenheim in Abu Dhabi, which we started [almost] 15 years ago, has now come back to life. They’re getting ready to build it, so we have a team working on that.

You also do a lot of charitable work.

We’re still doing a lot of philanthropic projects in Los Angeles and South L.A. There’s no open space, there’s pollution, all kinds of problems. We’re building a cultural center and we’re working on the Los Angeles River. It’s a wide swath of open space and we’re trying to figure out how to capture some of it for a park and recreational uses without interfering with its primary role as a flood control. We’ve been working with all the experts on water and water reclamation because reclaiming water in California is a big deal. Inevitably, when you get into these neighborhoods, it gets you into issues of social justice, so we’ve got a component of our work that’s involved with that.

What made you want to design a cognac bottle?

It started with meeting Bernard Arnault and working with him on the design of the [Louis Vuitton Foundation] museum in the Bois de Boulogne for his collection. Over the period of designing and building that work with him, I got to know him very well. As we were working together on various things, he kept saying, [in a French accent] Well but Frank, I have this cognac. We went down [to Cognac, France] and spent an afternoon looking at the Charente River and at the manufacturing of cognac. I realized the people involved were so committed for life to this—that all of their lives were spent perfecting it. One of the highlights of my life is the time I spent with [Bernard] and working together.

What’s a piece of advice you’ve gotten that’s guided you?

The advice I have for architects is [to remember] that [in] the history of architecture, [during] the Renaissance, architects were artists. Giotto was a painter who became an architect. Michelangelo was a painter who became an architect. I hang out with a lot of artists, a lot of friends over the years, and we work very similarly and have a lot of mutual respect for how we work. So I think architecture is an art. Keep it there. It’s important these buildings can resonate, make people’s worlds a little more beautiful and exciting to be in, give feeling and ideas and help propel our cultures. We deify great architecture from the past, the tourist trade builds on them. Why shouldn’t we be building architecture as art?

This interview has been edited and condensed.

ByBiography EARLY THIS FEBRUARY, before we all began sheltering in place, visitors streamed into the Jeffrey Deitch Gallery in downtown Manhattan to ogle a one-of-a-kind...
Read more
Lifestyle

COVID symptoms: Do you have coronavirus or is it just a cold? Sign in your cough to spot

ByDr Colbourn also outlines the defining signs of flu. She said: “The flu tends to cause more whole-body symptoms rather than upper airway symptoms, like...
Read more
Lifestyle

ByPrincess Anne is the only daughter of the Queen and is often considered one of the hardest working royals. She has regularly been seen with...
Read more
Lifestyle

ByDrivers overtaking slow-moving vehicles “should return to the left-hand lane” as soon as they have got past. The RAC warns that lane hogging can lead...
Read more
Lifestyle

ByChino Valley Ranchers Pasture Raised Liquid Whole Eggs are a nutritional powerhouse packed with protein and healthy fats, easy to use and offer a...
Read more