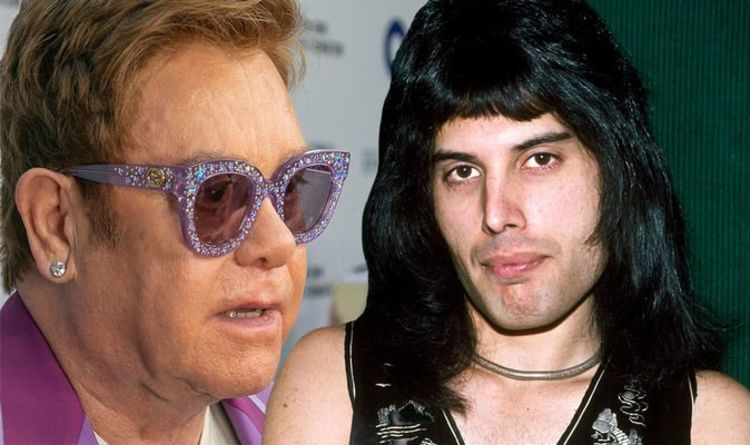 Sir Elton John’s new biography, titled Me, is a no-holds-barred tell-all about the highs and lows of his life and musical career, and references his many brushes with the rich and famous.

But one aspect of his life stands out in particular – his long and difficult battle with cocaine and alcohol addiction.

And in one section of his new book, Elton even admits his friend Freddie Mercury, the late and iconic Queen singer, tried to get involved.

Freddie wasn’t the only one, as Elton shared how many of his friends warned him about using the drug, often insisting he should get help from a professional rehabilitation facility as his abuse reached new heights during his career in the 1980s.

Elton shared how the drug began controlling him though the height of his fame, and at one of the many parties Freddie confronted him about the problem.

Elton also revealed Beatles star George Harrison was also there, and Freddie asked another friend to try and convince the Can You Feel The Love Tonight singer it was time to get help.

According to Elton, his lover Hugh Williams was the one who finally managed to get through to him when he opened up on his own decision to go to a rehab centre and fight his addiction.

In his own words, Elton said: “I went ballistic, screaming, shouting, saying the most hurtful things I could think of.

“Afterwards, I holed up alone in a rented house in London for two weeks, snorting cocaine and drinking whisky.

“On the rare occasions when I ate, I made myself sick immediately afterwards.

“I didn’t wash, I didn’t get dressed. It was sordid. Awful.

“Eventually, I realised that if I carried on for a couple more days, I’d either overdose or have a heart attack,” Elton continued.

“I had no idea how to live, but I didn’t want to die,” the star added.

Elton then checked himself into a Chicago facility for his addictions to drugs, alcohol and food.

After a difficult period, the singer joined the AA and finally embarked on his journey to recovery.

“I had to write all the time,” he wrote in his book. “Including a farewell letter to cocaine – which Bernie [Taupin] read when he visited and broke down in tears – and a list of consequences of my drug and alcohol abuse.

“The list of consequences went on and on for three pages. Self-hatred. Severe depression. Going onstage under the influence of drugs.”

Later, he shared his heartbreak over retaining his ties to drugs, even revealing he has dreams about cocaine.

“It’s always the same dream: I’m snorting coke when I hear someone coming into the room, usually my mother,” he said. “Then I try to hide what I’m doing, but I spill it and it goes everywhere – all over the floor, all over me. but it never makes me hanker after cocaine,” the star added.