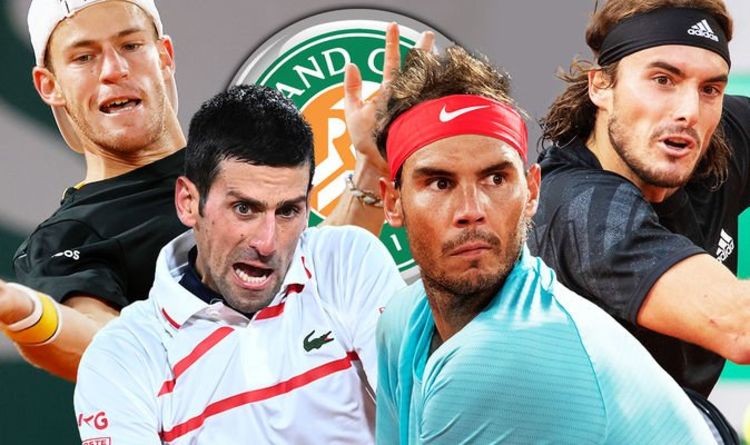 2-0: It’s gone from an almost disasterous start to a dream one for Novak Djokovic as he comes from 0-40 down on his opening service game to break Stefanos Tsitsipas’ serve in the following game.

4-2: We’re racing through these games. Both players continue to hold serve but it’s Tsitsipas who must start turning the screw to avoid falling a set behind.

6-3: Pretty routine stuff from Djokovic, or at least he’s making it look like that, as he serves for the set. No sign of that arm injury which hindered him in the previous round.

6-3, 1-1: A nervy start for Djokovic as he is forced to fend off several break points as Tsitsipas looks to get ahead in this second set.

6-3, 3-2: That’s the break Djokovic has been looking for as he takes the ascendancy in set.

6-3, 6-2: Another break for the world No 1 and that’s the second set wrapped up. Long way back here for Tsitsipas.

6-3, 6-2, 5-5: Tsitsipas keeps his French Open campaign alive by converting his third break point of the game to level the scores in this set.

0-1: Rafael Nadal holds serve in the opening game of the match but not without a challenge. The game lasted more than 10 minutes.

1-3: Nadal breaks his opponent in his first service game but is then broken back immediately in impressive fashion. The Spaniard doesn’t let that bother him though as he breaks again.

2-4: This time Nadal holds to consolidate his break but Diego Schwartzman is impressive in holding to keep things within reach.

3-6: First set Nadal. Schwartzman pushed the world No 2 to deuce but a backhand into the net by the Argentine wrapped up the set in one hours and five minutes.

3-6, 1-3: Nadal breaks in the third game and then kicks on to extend his lead in this second set. All of a sudden starting to look like a long way back for Schwartzman.

3-6, 3-4: Almost another break but Schwartzman holds on by the skin of his teeth. The Spaniard is trying to shift through the gears now.

3-6, 3-6: This can only go one way from here as Nadal takes the second set with another break.

3-6, 3-6, 1-3: Nadal gets the break in the final set and he is now on the home stretch. Time for Novak Djokovic and Stefanos Tsitsipas to start finishing their warm-ups.

3-6, 3-6, 2-4: Well that lasted long. Nadal breaks straight back in the following game to regain his advantage.

3-6, 3-6, 3-4: There are still plenty of twists and turns left in this one as there is a fourth break in a row. Schwartzman with a chance to draw level on serve…

3-6, 3-6, 5-5: Schwartzman is fighting for his life out there on court Philippe-Chatrier as this set looks destined for a tiebreak.

3-6, 3-6, 6-7(0-7): Nadal absolutely dominates Schwartzman in the tiebreak to book his place in the final without dropping a point.