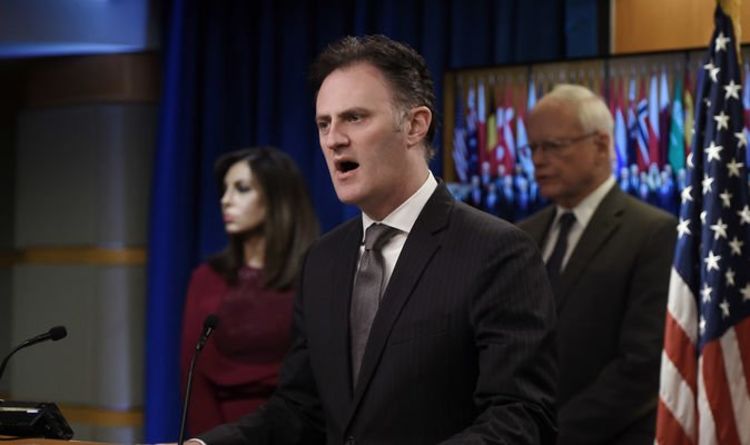 The United States and its European allies on Thursday grappled over what to do with the scores of foreign jihadists detained in Syria, with Washington pouring cold water on an “irresponsible” French proposal to prosecute fighters in neighbouring Iraq. “The United States thinks that it’s inappropriate to ask Iraq, in particular, to shoulder the additional burden of foreign fighters, particularly from Europe,” Nathan Sales, the US State Department’s counter-terrorism coordinator, told reporters.

“It would be irresponsible for any country to expect Iraq to solve that problem for them… We think there should be a sense of urgency to repatriate now while we still can,” he continued.

Secretary of State Mike Pompeo also told European officials that the US would hold foreign fighters “to account”.

He added: “Coalition members must take back the thousands of foreign terrorists in custody and impose accountability for the atrocities they have perpetrated.”

The US comments could be seen as a swipe at France, which has spearheaded talks with Iraq about prosecuting foreign nationals.

European states such as France and Britain are reluctant to take back hard-core Isis jihadists, who have in recent years orchestrated a string of brutal attacks against civilians on EU soil.

French Foreign Minister Jean-Yves Le Drian – who has referred to French Isis members as “enemies” of the state – said his government was pushing for the “certain and lasting detention” of fighters.

M Le Drian told reporters: “For our part, we will continue to say that they should be tried as close as possible to the crimes they committed.

“Let’s never forget that these men and women who joined Daesh made a fully conscious choice to fight for a terrorist organisation.”

France wants to underline that “nothing is called into question and that the crimes they have committed in Iraq and Syria do not remain unpunished”.

European governments have also stripped a number of dual-national citizens of their passports over alleged Isis links.

Despite lingering differences, senior officials from over 30 countries pledged to boost coordination in the battle against Isis in the meeting in Washington proposed by France, which has expressed the most concern about US President Donald Trump’s decision last month to pull American troops from Syria.

Mr Trump’s move paved the way for the controversial Turkish military operation against Kurdish forces in the north-east border region.

The Kurds, the US-led coalition’s main allies in the fight against Isis, run prisons and camps for captured extremists and their relatives.

Brushing off criticism over Turkey, Mr Trump has repeatedly argued that the US has accomplished its military mission in Syria by defeating ISIS, though he has since admitted that some US troops will remain on the ground to secure oil fields.

US special forces will stay on to “make sure Isis will never get a second wind,” Secretary Pompeo said.

He added: “The United States will continue to lead the coalition and the world on this essential security effort.”

M Le Drian, for his part, welcomed a joint statement reaffirming the anti-Isis coalition, stating that all members agreed “to avoid unilateral steps without consulting others”.

The ministers said they would meet again next year to discuss Isis’ growing presence in West Africa, where the militant group has launched a spate of bloody attacks.