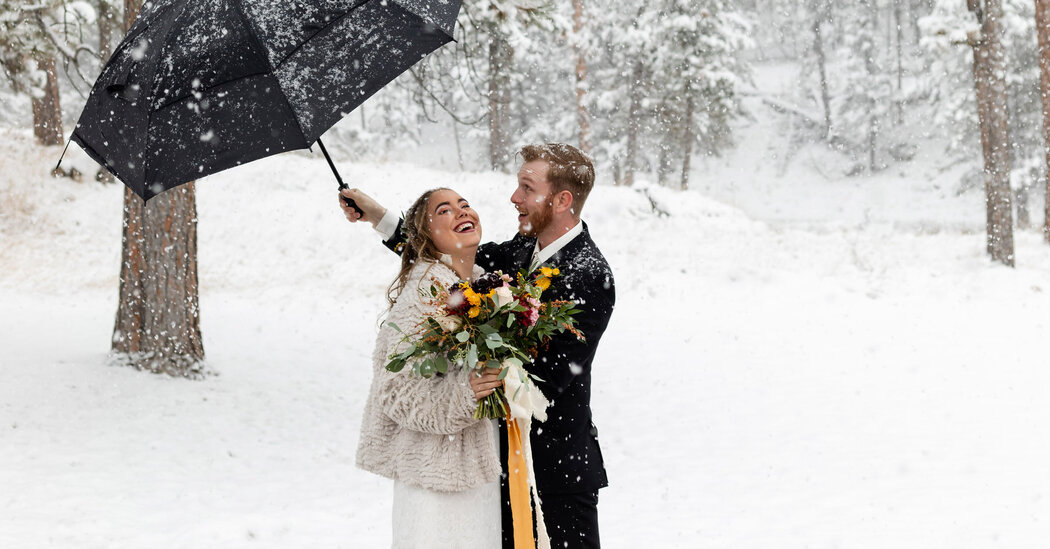 David Rhoades skipped a lot of school in the mid-2000s as a student at Sturgis Brown High School in Sturgis, S.D. Not much held his attention, besides a girl a year younger who was good at painting and drawing.

“Nikki and I had known each other since eighth grade, but in high school we really started talking,” said Mr. Rhoades, 29. By the time he dropped out in 2009, his senior year, he and Nikki, whose name is Nicole Weiss, were boyfriend and girlfriend. Little about their relationship has changed since then. “We have a shared sense of humor and we both like the same movies, the same music,” he said. “Once we were together, neither one of us ever wanted to be with anyone else.”

When Ms. Weiss graduated in 2010 and started college at Black Hills State University, Mr. Rhoades went, too, finding odd jobs in Spearfish, S.D., to pay the rent. When she quit college and moved to Rapid City, S.D., after a year because she wasn’t sure a degree would guarantee her a job as an art teacher, he was right beside her.

In 2016, after years of figuring out who they were separately and together — “I come from a military background and she comes from a flower child background, but we’re both super open-minded,” Mr. Rhoades said — they started talking about marriage. On March 5, 2017, during a getaway to a bed-and-breakfast in the Black Hills of South Dakota, he proposed. Ms. Weiss, 28, knew the day was coming but was still surprised. “I said, ‘Well, duh,’” she said. They left the Black Hills engaged.

The next few years would be defined by work more than wedding planning. Mr. Rhoades found a maintenance job at a local apartment complex. Ms. Weiss took a job at the home improvement store Menards, then found a maintenance position at a different Rapid City apartment complex. By the time they got around to setting a wedding date, the coronavirus had rearranged the world.

“We talked about July 2021 in the hopes that Covid would be over,” Ms. Weiss said. That plan would take a sharp detour over the summer. On July 31, Ms. Weiss was at work when she was overcome by a familiar feeling. “I thought I was having a really bad panic attack. I’ve had them before.” This time, though, the attack felt slightly different. When she found she couldn’t speak, a co-worker drove her to the emergency room. She had already contacted Mr. Rhoades.

“She called me during lunch and said she thought she was having a panic attack, so I walked her through the steps she had told me about to help calm her down,” he said. When he called her and she didn’t call back, he worried. Then he got a text. “It just said, ‘Help.’”

Within days, Ms. Weiss would be sent to the Mayo Clinic in Rochester, Minn. She learned she had a rare form of brain cancer. Though doctors hope to slow the growth of the mutating mass wrapped around her brain stem, her condition is incurable. For Ms. Weiss and Mr. Rhoades, mapping a future together took on new urgency.

The first night she was hospitalized, after Mr. Rhoades won his fight with hospital staff to let him stay in Ms. Weiss’s room amid Covid restrictions, they hatched a plan to marry sooner. “We’re more in love than we are scared,” he said. “We said, ‘Let’s do it.’”

On Oct. 18, they were married at Prairie Berry Winery in Hill City, S.D., Ms. Weiss’s dream venue, with the help of many local vendors who donated their services to put together an intimate fall-themed wedding for 30. Inspiration came courtesy of a Pinterest board Ms. Weiss created while undergoing radiation and chemotherapy sessions at the Mayo Clinic.

Before they were married by KC Bunch, a licensed officiant and worship leader at Liv2Worship Ministries, they read handwritten vows. Neither acknowledged Ms. Weiss’s diagnosis.

“We just wanted to have a day when we weren’t thinking about it,” Ms. Weiss said. For Mr. Rhoades, that is difficult. But, he said, “we’re taking it one day at a time, trying to make each other happy and keep each other laughing.”