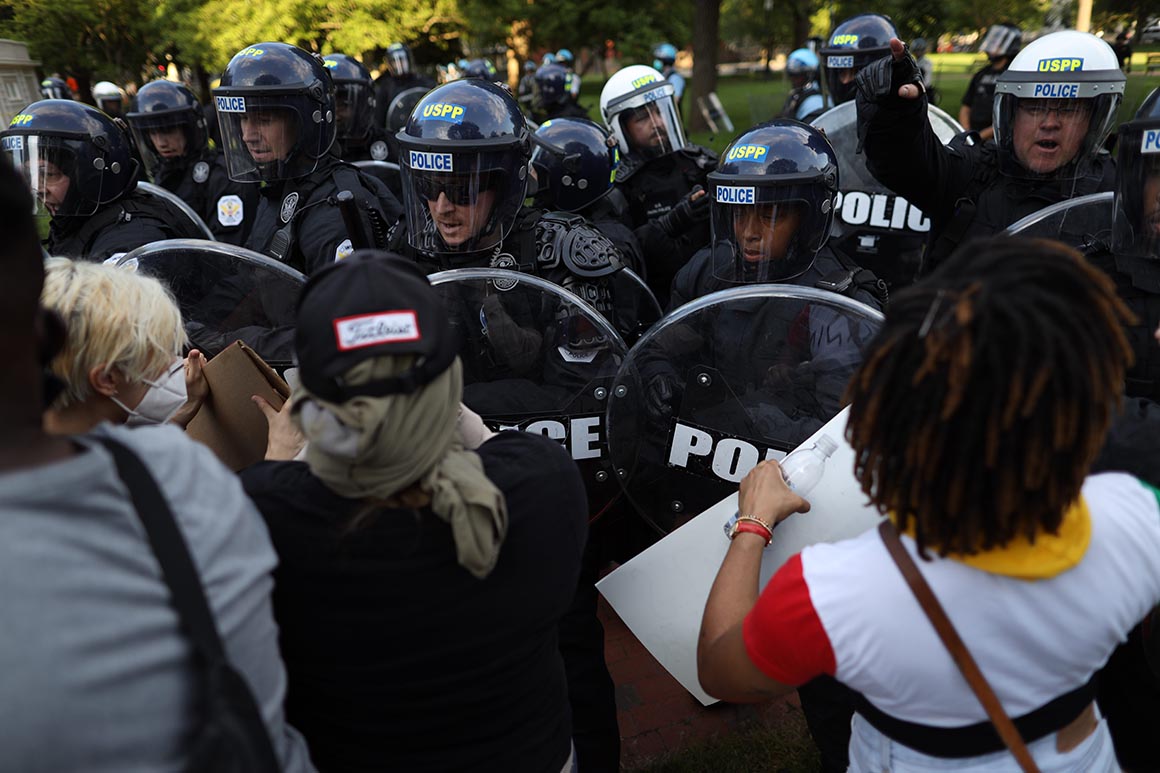 Politicians, meanwhile, have insisted the groups are ramping up violence, even though they offer little conclusive evidence to support the claims. Trump has pointed the finger at left-wing Antifa, while Democratic officials in Minnesota, including Gov. Tim Walz, blamed out-of-town white supremacists.

Meanwhile, a new Department of Homeland Security memo obtained by POLITICO warns of Boogaloo followers advocating violent insurrection. “A white supremacist extremist Telegram channel incited followers to engage in violence and start the ‘boogaloo’ — a term used by some violent extremists to refer to the start of a second Civil War — by shooting in a crowd,” the memo stated. Citing information from the FBI, the memo also warns that “suspected anarchist extremists and militia extremists allegedly planned to storm and burn the Minnesota State Capitol” on Friday.

In Minneapolis, reports have emerged of clean-cut young white men, described by regular protest attendees as looking out of place, instigating some of the property destruction. Video showed one such young man, holding a black umbrella and systematically breaking the windows of an Autozone with a hammer as other protesters sought to question his motives.

On Saturday, Walz estimated that 80 percent of those arrested in Minneapolis on Friday were from out of state. John Harrington, commissioner of Minnesota’s Department of Public Safety, said white supremacists were among those being detained. But KARE 11, the local NBC affiliate, found that in a sample of arrests recorded at a local jail, 86 percent of those arrested listed Minnesota addresses. Of those arrested from out of state, the outlet said it found only one person whose social media presence showed clear support for white supremacy.

Walz later backed off his claim. “The truth is, nobody really knows,” Democratic Attorney General Keith Ellison said on Sunday about the composition of those committing violence.

Trump and Attorney General William Barr, meanwhile, have blamed unrest on Antifa, and Trump has threatened to designate the movement as a terrorist organization. Representatives of Antifa groups have dismissed those accusations. Of 17 people arrested in Washington on Saturday, most had ties to the region, according to information provided by police.

Part of the problem with making attributions is that the extremist groups are not centrally organized. “David” said he was unaware of Antifa members participating in violence: “I don’t know of anybody in particular or specifically, and I probably wouldn’t comment if I did.”

A Richmond-based Antifa group, known as Antifa Seven Hills, wrote in an email: “Antifascists aren’t coordinating or organizing these rebellions in the way that many on the Right think,” the group wrote. “But we do provide support, (largely in the forms of food/water, medical, legal) and hold defensive spaces for individuals to make autonomous choices. We certainly don’t get paid to incite any violence or fear.”

The Georgia-based group known as Atlanta Antifascists said in an email that it did not “have the capacity” to answer a question about whether members of Antifa groups had participated in recent violence. “We’re a nonhierarchical group, so we can’t speak for other groups,” it wrote, “and we don’t even speak for our own members when they’re not with our group.”

The same is true for The Boogaloo, a much newer movement that emerged from right-wing, anti-government online forums. Its name is an indirect reference to a second civil war, and it has gained momentum in recent months through armed protests of government coronavirus lockdown measures. Its imagery and anti-government sentiments have traveled widely online, but adherents are spread across countless social media and chat groups.

“There’s not really direct communication at all, or really any real names,” said Matthew, a 23-year-old student active in Boogaloo groups, who asked that his last name be withheld.

The movement has attracted a grab-bag of different anti-government activists, including some white nationalists. “There’s kind of a complicated intersection for white supremacy and the Boogaloo groups,” said Daniel Stevens of the Tech Transparency Project, which published an investigation of the movement in April.

But many of its members expressed solidarity with George Floyd, the black man whose death in Minneapolis at the hands of police officers has sparked a week of protests and rioting. Many members of the Boogaloo compare Floyd to Duncan Lemp — a member of a far-right militia group who was fatally shot during a police raid at his home in Maryland in March — and who is now considered a martyr by the nascent movement.

One Facebook group associated with the Boogaloo, Sons of Liberty Information Network, is organizing a “protest against government oppression” later this month at the Arkansas Capitol in Little Rock. The group’s image for the event features a photo of Floyd, and several posts on its page are supportive of the recent protests.

People affiliated with the movement also express varying degrees of seriousness about the idea of overthrowing the government. Stevens said Boogaloo groups share documents about the use of weapons and combat tactics. But Matthew Kelley, a Massachusetts security guard who engages in online Boogaloo groups and describes himself as sympathetic to anti-government movements, said people who post seriously about civil war are called “smooth brains” — slang for morons — in many of the forums.

Another difficulty of dealing with extremist movements in the digital era is the speed at which they evolve.

Matthew, the 23-year-old Boogaloo follower from Missouri, said he attended a protest this week in the city of Columbia while carrying a sidearm. But he said he had little interest in civil war and that many of the Boogaloo groups were moving on to other goals. He said he was becoming more interested in exposing pedophiles.

“People are really starting to share different ideas about what they want for their own personal boogaloo,” he said.