From automobiles to wristwatches 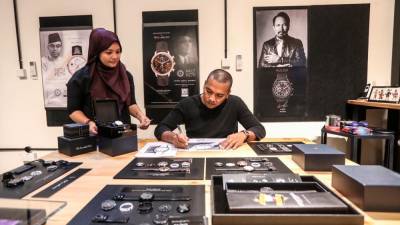 BOSTAMI AHMAD is no ordinary designer. He grew up the son of Felda settlers who did not even own a car. However, his love of designing and pursuit of excellence led him not only to the designing studios of Lamborghini, but also getting shortlisted as a candidate to become Malaysia’s first astronaut.

Bostami said: “I’ve always loved designing. When I was a kid, I thought to myself that I would design a car for my father someday.

“When I was in Form 3, I remember writing ‘One day I will design a Ferrari’ in the margins of my notebook.” It was a farfetched dream, but that did not deter him from reaching for the stars.

“In 2008, 2009, Lamborghini Design announced that they were looking for a young designer to develop a new DNA for their Lamborghini car design. And it came with a scholarship and a master’s degree.

“It was opened to entries from all over the world. It was crazy. Thousands of people applied. I had to try because I love designing cars and automotive stuff,” said Bostami.

“I was in Shah Alam at the time. I had to go back to my home in Jengka, Pahang, Because all of my work was under the bed there,” said Bostami.

He spent close to RM500 to ship his designs to Italy.

It took another three months before he received the call he has been waiting for.

“Long story short, I spent one and a half years in Italy doing the scholarship,” said Bostami.

When he returned to Malaysia, Bostami worked on some of the Proton cars we see on the roads today.

The duo combined their collective mastery that was developed at the Scuola Politecnica di Design in Milan and shaped by their experience with Lamborghini, Moleskine, 3M, and Google XPrize Moon Mission.

At a glance, Artwist.Co is a company that produces premium art and artist-centric watches.

“After the first year of research and development, that was how we started, making artist watches,” said Bostami. These are one of a kind and limited edition watches that feature unique artwork by artists from all over the world.

These watches are designed by Artwist.Co and are made using quality global materials and production methods.

Over the past year, Artwist.Co has designed and produced watches with Datuk M.Nasir, Butterfingers, Boys of Straits, and Miey Ali, in addition to some of original designs.

Currently Artwist.Co has designed and is producing the first two watches in the Malaysia Prime Ministers series featuring Tunku Abdul Rahman, and Tun Abdul Razak, Malaysia’s first and second prime ministers. It is the result of a collaboration with the Malaysia National Archive.

“Those who purchase any of the Artwist.Co Prime Minister Series watch will also stand a chance to win the two Negarawan Watches featuring hand-drawn portraits of Tunku Abdul Rahman and Tun Abdul Razak, by the mural artist, Miey Ali,” said Bostami.

They are also designing and producing the *Wings* 35 Years Anniversary watch, in collaboration with local rocker Awie and Wings.

“Our core strength is design. We partner with international manufacturing and use Japan Movement such as Seiko and Miyota as our watch movement. This is basically the engine of our watches, the beating heart of every Artwist.Co timepeace,” said Bostami.

He hinted that the strength of Artwist.Co is the collective experience that members of the team have gained through working in various industries around the world.

They research and curate everything they do; from the designs to their collaborators, and their partners.

“Each design is created specifically and meticulously to fit the artist, person, or theme of the watch. We take into account their persona and their fans as well,” said Bo.

He added that the company has plans to go beyond wristwatches, and intends to celebrate local legends and international talents by immortalising them in timepieces.

You can browse and purchase Artwist.Co collection of timepieces at Artwist.Co and follow them at @artwist.co on Instagram.