From hobby to business venture 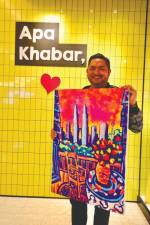 JID KAY Artworks is a local brand that brings life to the narratives of Malaysia through a spectrum of vibrant hues. The artist behind the artworks is Yazeed Datuk Kayoom, who goes by the name Jid. Kay is his father’s nickname. The name Jid Kay Artworks represents the father-son bond that was built through the love of art.

Painting is actually a favourite pastime for both Yazeed and his father, who was the first to recognise the creative talent in his son. (Fun fact, both of them are left-handed.)

Because of this Yazeed, who was 14 years old at that time, was sent to a boarding school in Sydney, Australia which had a good facility for art. Yazeed eventually graduated with a degree in Fine Arts and Design.

He said: “Australia itself loves art very much, it is part of their culture and lifestyle. So, being in Australia and being exposed to the arts and culture took me to the next level.

“During school we would visit national museums and talk about the different artists. I was like a kid in a candy store.”

The main source of inspiration for Yazeed’s style of art was Ken Done, an Australian artist known for his iconic painting of the Sydney Harbour. “He is a very colourful artist,” Yazeed said.

Eventually, it was time for Yazeed to return home to Malaysia.

However, as soon as he came back, he dived into the corporate world, specifically branding and marketing, instead of pursuing a career in fine arts.

Yazeed recalled: “Something happened in university that opened my eyes, where my lecturer flunked me on the basis that I designed what I wanted instead of what the clients wanted.

“That woke me up. If you want to be somebody who designs something, you must understand the demand.”

The corporate world can be hectic at times. As an escape from the stress of work, Yazeed took a two-week holiday to do something he had not done in some time.

“I hadn’t painted in awhile. What I’d always wanted to do was to paint KLCC in an interpretation that I have always loved, which is like the Van Gogh and the Matisse style, but to do it [for] a Malaysian subject matter.”

After finding the perfect visual of KLCC, captured from a family home in Kuala Lumpur, Yazeed proceeded to paint. Upon completing his artwork, Yazeed decided to share the photograph of his painting via Facebook with his family back in Sydney.

“I just wanted to share it and at that time, Facebook had a platform where I could showcase.

Then I had an Australian guy say: ‘Look Yazeed, I have just been to KL, I love KL. Your painting really depicts what I feel about KL, is it for sale?’”

What was initially a hobby became a business venture for Yazeed, as opportunities came pouring in.

Fortunately, his marketing career equipped him with the essential skills for managing his brand.

Out of the blue, both the Petronas art gallery and gift shop reached out to Yazeed because they were interested in his work.

Yazeed suggested that he could utilise the photos of his artwork and turn them into souvenirs such as postcards, magnets, and mugs.

“It was something that I’ve always wanted to do because of my background in merchandising.”

Today, Yazeed’s artwork-turned-merchandise are available at the APOM (A Piece of Malaysia) store in Suria KLCC.

And there has never been a better time for art lovers to support local!