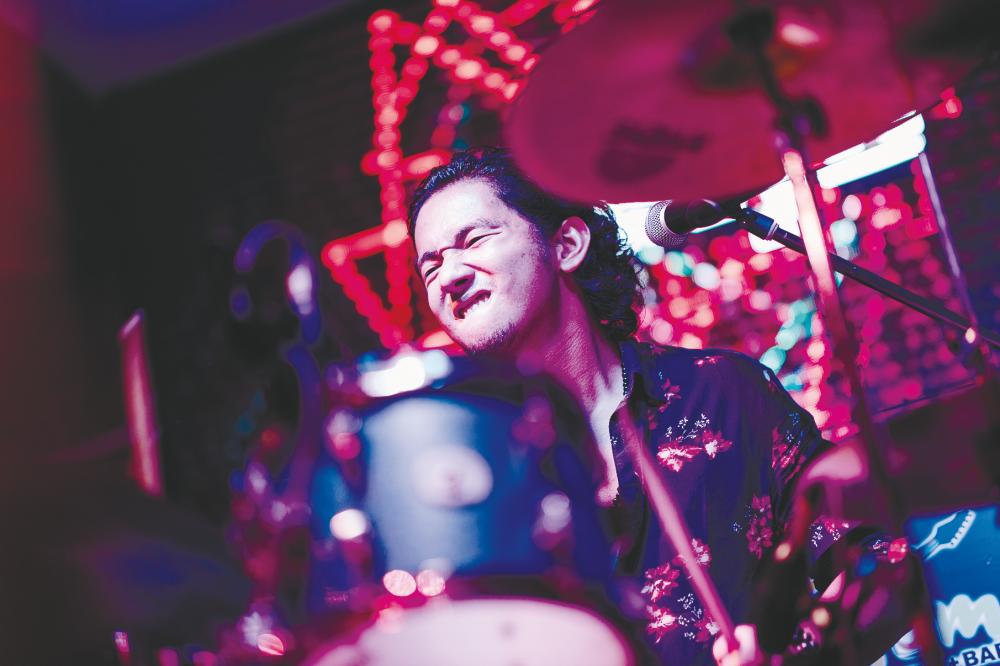 MULTI-INSTRUMENTALIST Maha Jeffery fronts local band TMJB as both vocalist and guitarist. Having been exposed to music as far back as his memory stretches, and through the encouragement of his guitarist father, Maha (and his band) are forces that demand more attention.

After a turning point involving him getting caught smoking in school, Maha thrust himself into music with an electric guitar gifted by his father, performing during school events, including talent shows, orchestras and plays.

“I still use that same Mexican made Fender Stratocaster [guitar] to this day, and have used it for at least 95% of my shows.”

Maha’s aptitude in instruments can be seen in his performances on drums, guitar, piano, and even bass.

“I picked up the guitar in high school so I could play 4-chord love songs and impress the girls (point me in a direction of a guy who didn’t and I will show you a liar).”

Singing came in last for Maha, as he only began to take it seriously at the age of 17.

“Before that, I never really saw myself as a singer, or a frontman. I was always the drummer in the back who tried to do backing vocals, albeit poorly.”

Back in high school, Raz, the second member of TMJB, left his electric guitar and amp at Maha’s house. The frontman of TMJB claims this was when he got into heavy rock and metal, as he spent the whole night learning Megadeth’s Symphony of Destruction.

After his first serious band disbanded, Maha and Raz began to play at every open-mic event they could find, with Maha on vocals and sometimes the guitar, while Raz played the lead guitar.

“(TMJB itself was) formed over the existing foundations of a solo project. ‘The Maha Jeffery Band’ we used to call it. We released our first single Sleep under that name,” Maha clarified.

As the band got more involved and started contributing more with the writing process, the members decided a rebirth was in order.

“We sat down for a good hour at Drum Asia in Hartamas to come up with a name. Eventually we all gave up and decided to shorten it to TMJB and go the BFM route,” he says.

Though Maha and Raz founded the band, they are not the only members. Frontman of the Leon Sapphire project, Keith Noel slaps the bass on TMJB, while Sid Murshid can be seen on the keyboards.

Each member are powerhouses with their own instruments (and Maha with his vocals), but they do not work independently from each other when it comes to compositions and the nitty gritty of bringing their music to life.

“A lot of people tend to think that because there’s a lot of star power in play there’d be a lot of ego. Well, I’m not gonna deny that (and that most of it comes from me) but that’s where both me and Raz come in with managing the sound and direction,” Maha says.

He further claims that as Raz and Sid are theoretically adept, they handle the musical arrangements, while he takes a step back in deciding what comes after the “overall wall of sound” is created.

Maha adds: “At the end of the day, when we enter the writing process, we all work [towards] one goal and that is the sound of the song. It’s those kinda times where you think: ‘Hmmm a guitar solo would be cool here’, but then you have someone else chime in and say: ‘Yeah but it doesn’t make sense with the song’, and you scrap the idea.

“But that doesn’t mean we don’t indulge once in a while. I mean, our song Out the Door is eight minutes long with four solo sections!”

Very much like Maha himself, TMBJ does not necessarily fit into any one genre, though to the untrained ear, they might sound like a rock band.

“I’ve really enjoyed not being able to fit in a single genre stream cause it sort of sums me up as a person. I’ve never really belonged to a single clique, and much prefer embracing the fact that I can jump between many and any,” he claims.

“Each of us have varied musical backgrounds and influences, which also helps put things into different perspectives.

“Keith has a very R&B vibe. Sid, on the other hand, is a bit on the poppy side, Raz has a massive classical influence, and I’m born and bred in rock and roll and metal.

“We’re all just different pieces of the same puzzle, it’s just taking the pieces and making them fit.”

Keep on keeping on

TMJB was set to release its new single Radio on all streaming platforms this month, but the day Maha was supposed to enter the studio to lay down the drum track, the movement control order (MCO) went into effect.

Like everyone and everything else, the MCO has temporarily put a dent in the band’s plans.

“We had quite a few shows lined up for April, May and June that had to get cancelled, and it’s unfortunate, because live shows are quite a big chunk of our income,” said Maha.

Until things are back up and running, Maha can be seen doing live shows on Facebook and Twitch for those interested in watching his stripped down acoustic shows.