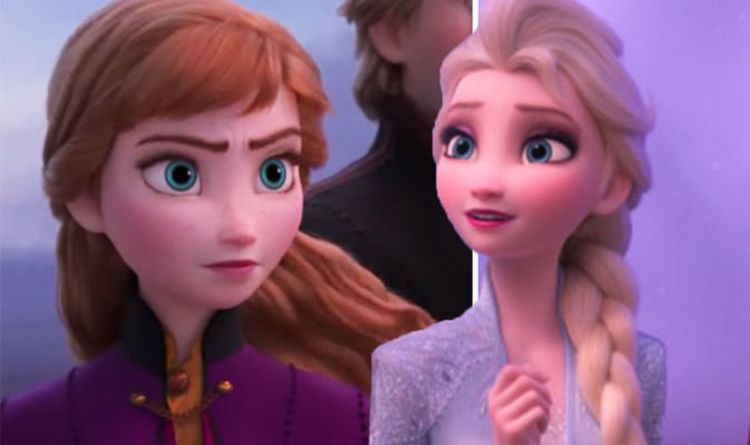 The official trailer of Frozen 2 has already revealed fans can see Elsa and Anna’s family history will be explored. And one of the biggest questions in the animated fantasy – exactly why Elsa has powers and where they originate from – will be answered when she and her sister embark on an adventure to visit a new land where they find a mysterious group of people hiding. The Disney trailer also shows Elsa continuing to build on her confidence with her magical ice power, and Anna runs into danger after her as always. But one of the major plot points left hanging in the first film was the tragedy that saw the sisters’ parents heading out one fateful night in search of help for their daughter, before being swept away at sea.

Asked what questions they had after the first film had ended, and how they focused their minds to plough forward with the sequel, Del Vecho teased: “We started to look at it from Anna and Elsa’s point of view.

“Where are the parents going when the ship went down, is there anything?” he told Black Girl Nerds website. “Is there a happily ever after?

“For me, in a big way, Elsa has been accepted for having her powers,” Lee chimed in. “Anna finally has her sister, but why was Elsa born that way?

“Why doesn’t Anna have powers, what are they meant to do with their lives and I think, how does Kristoff fit in that?

“They were at the beginning of their relationship in so many ways… even Olaf had just been born, so to really see that family grow and to see how change affects family.

“I think that was the biggest thing for us,” the director continued. “We say happily ever after but we know, the world changes like ‘that’ [she clicked her fingers] and has a huge effect on you and your family, and looking at it that way we all said right away, that’s where we need to go.”

The trio went on to say what they hoped the audiences walked out of the cinemas with, and the overwhelming emotion was “surprise”.

“Oh wow that’s a lot,” Lee laughed. “I hope they walk out pleasantly surprised, that we do surprise them, but that they’re proud of where these characters have gone on this journey.

“That they relate to it, and I think ultimately what I hope as always, is through Anna and Elsa you see the power of love and the power of family and perseverance.

In terms of what the production team look for in doing a sequel, and in particular the growth and development of the characters while maintaining their core values, they admitted it was a challenge.

Buck said some of what they put into the shift was inspired by their own children, and how they’re growing up.

“They’re still the same kids, same personalities, but now they have all these challenges ahead of them all these steps into the unknown which are exciting,” he explained. “So you can look at their lives, and be inspired by that.

“Also not being afraid to take risks when it comes to our characters and the story and pushing them to places that perhaps they may not feel comfortable, but we know they’re capable of,” the director added.

Frozen 2 is released in cinemas November 15.