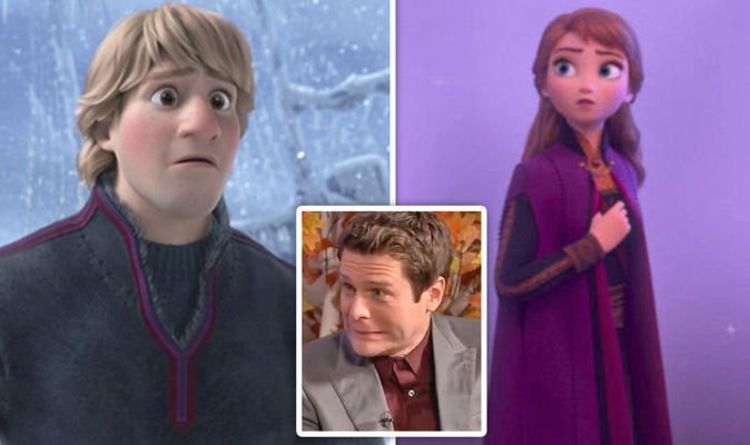 Frozen 2 actor Jonathan Groff joined co-stars Josh Gad and Idina Menzel for a Q&A session with Edith Bowman earlier today ahead of the release next Friday. Whilst discussing one of his big moments in the upcoming Disney sequel, he accidentally let slip a revelation about the storyline.

After hearing a clip from Kristoff’s song, Lost In The Woods, Elsa actress Menzel interjected: “This is where it’s weird to hear the music before you see it in the movie. Because there’s a context going on…”

Bowman then asked Groff to explain, without ruining the movie, what the context for the song was and what was happening for Kristoff at that moment.

“No one here’s seen the movie right?” Groff asked, turning to the audience. “No, obviously not.

“So basically, Kristoff is trying to propose to Anna in the second movie.”

When the crowd let out a few gasps, he caught himself, adding: “That’s kind of a spoiler alert I guess!

“And it’s not going well for him because he’s a mountain man and he has trouble expressing his feelings, particularly, as far as love is concerned,” Groff continued.

“About half way through the movie it’s another failed attempt at a proposal and a fantasy sequence happens where Kristoff lets loose singing an ‘80s-inspired emotional ballad.”

Explaining what the Lost In The Woods looks like visually, he added: “The animation is sort of like an ‘80s music video.”

Following the phenomenal success of the first Frozen movie back in 2013, Frozen 2 will be released on November 22.

It tells the story of Elsa, her sister Anna (voiced by Kristen Bell), Kristoff and his reindeer pal Sven as the kingdom of Arendelle faces another threat.

The film also delves deeper into Elsa’s hunt for her identity after the original showed her coming to terms with her magic powers and who she really was.

Elsewhere, Frozen director Jennifer Lee recently spoke out on the reasoning behind a change to Elsa and Anna’s outfits in the second film, which sees them wearing trousers as well as dresses in a rare move for Disney heroines.

“Everyone sort of represents when the film was made and what the film’s trying to show.

“These two women I’m proud of, they are carrying the weight of there kingdom on their shoulders, so they’re going to wear what’s right for that,” she continue. “And I love that you can wear anything.”

In the past, it’s been uncommon for Disney princesses to wear anything that’s not traditionally feminine, the exception being Mulan, when she was disguised as a man, and Jasmine, who wore harem pants in Aladdin.

Frozen 2 will be released in UK cinemas November 22.