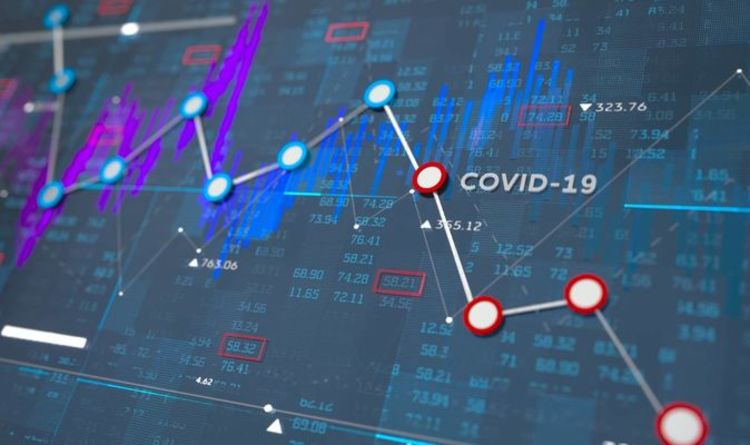 “It is a big shock to markets that China, which appears to have successfully quashed the disease, is seeing a second wave. And in the US we see record cases in many states,” said Norihiro Fujito, chief investment strategist at Mitsubishi UFJ Morgan Stanley Securities.

“All this suggests that the more you re-start the economy, the more infections you have. People have thought the economy will quickly recover in July-September after dismal April-June. But that is now becoming uncertain.”

Investors rushed to the safety of bonds, with the 10-year US Treasuries yield US10YT=RR falling 3 basis points to 0.704 percent.

In the currency market, the safe-haven yen rose about 0.3 percent to 106.72 per dollar JPY= while the US dollar also firmed against risk-sensitive currencies.

10.15am update: US stocks have wobbly day

Yesterday, seven stocks in the Dow index posted positive days, but none broke through the 1% daily gain threshold.

Exxon Mobil, Chevron and Boeing all fell by more than 2.5%.

The oil giants took a hit as oil prices fell due to a pickup in coronavirus cases, reigniting fears of weak demand for fuel.

9.30am update: FTSE recovers some losses

The FTSE 100 recoverd some of its earlier losses, to trade 0.2 percent lower than its level at the opening bell.

Germany’s DAX is now up, having wavered between losses and gains.

The pound is still down.

If the Bank of England discusses negative interests later, it could have a big impact on the value of the pound compared with both the dollar and the euro.

The FTSE opened around 0.5 percent lower, ahead of a decision from the UK’s central bank.

France’s CAC was also 0.4 perecent lower, mirroring the sentiment across the continent.

The FTSE looked set to open around 0.8 percent lower, as traders brace themselves for the Bank of England’s monetary policy decision.

Shares also fell in Asia, pulling back from gains made over the course of the week.

US stock futures looked set to open lower when the market opens later on.

This is Lucy Harley-McKeown taking over from Rachel Russell.

A second wave of layoffs amid weak demand and fractured supply chains is likely keeping new US applications for unemployment benefits elevated, supporting views that the economy faces a long and difficult recovery from the COVID-19 recession.

The Labor Department’s weekly jobless claims report on Thursday, the most timely data on the economy’s health, is expected to sketch a picture of continued labor market distress even though employers hired a record 2.5 million workers in May as businesses reopened after shuttering in mid-March to slow the spread of COVID-19.

Millions are still collecting unemployment checks. Federal Reserve Chair Jerome Powell told lawmakers this week that “significant uncertainty remains about the timing and strength of the recovery.” The economy fell into recession in February.

Initial claims for state unemployment benefits likely totaled a seasonally adjusted 1.3 million for the week ended June 13, down from 1.542 million in the prior week, according to a Reuters survey of economists.

The 11th straight weekly drop would push claims further away from a record 6.867 million in late March. Still, claims would be roughly double their peak during the 2007-09 Great Recession.

“People will say claims are coming down, but for an economy that is reopening, that is a huge number,” said Steven Blitz, chief U.S. economist at TS Lombard in New York.