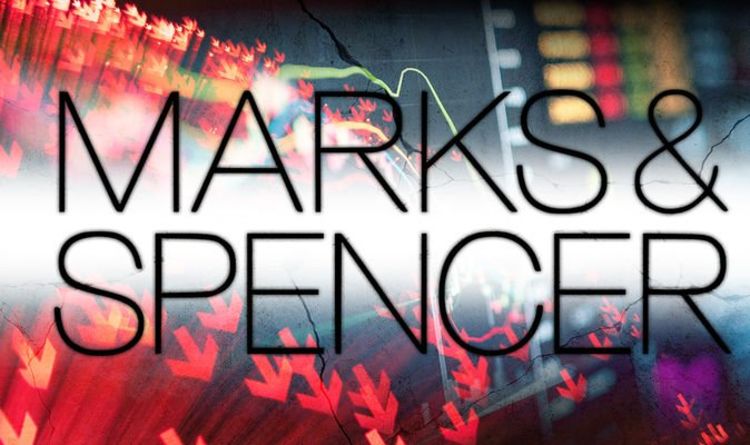 Today the share price is 97.75, which is still significantly lower than this time last month when M&S stock were trading at 107.850.

However, a spokesman said the move marks “an important step” in Marks and Spencer becoming a “stronger, leaner” business.

Sacha Berendji, director of retail, operations and property at M&S, said: “Through the crisis we have seen how we can work faster and more flexibly by empowering store teams and it’s essential that we embed that way of working.

“Our priority now is to support all those affected through the consultation process and beyond.”

Marks and Spencer reported in May its clothing sales fell by 84 percent year-on-year at the lowest point.

While shops can now welcome customers footfall was down 65 percent last month across the retail industry compared to last year with sales tumbling by 48 percent over the past three months as thousands of customers continue to stay away from the high street.

Futures tracking the S&P 500 and Dow turned positive as hopes of a coronavirus vaccine offset concerns about the economic damage from a surge in domestic COVID-19 infections.

Nasdaq 100 e-minis, which were up before the report, hit session highs.

It comes as German biotech firm BioNTech and US drugmaker Pfizer reported additional data from their experimental coronavirus vaccine that showed the vaccine was safe and induced an immune response in patients.

The Government is ready to support Marks and Spencer workers who may lose their jobs with universal credit and the job seekers’ allowance.

The Prime Minister’s spokesman said: “We know that this will be worrying news for M&S employees and their families and we stand ready to support them.

“Affected employees will be able to access a wide-range of support including universal credit and the job seekers’ allowance.”

1.40pm update: Britain will be constructive with EU in Brexit talks but will not give up its rights, says No 10 spokesman

The UK and the European Union will resume talks on Tuesday

Boris Johnson’s spokesman said: ”Our position on our sovereignty, laws and fisheries is clear, we will not give up our rights as an independent state.

“We will continue to engage constructively with the EU on these key issues and will work hard to reach the broad outline of an agreement, but as we have been clear all along we are not asking for a special, bespoke or unique deal.”

Speaking to BBC News the Prime Minister said: “China is a giant factor of geopolitics, it’s going to be a giant factor in our lives and in the lives of our children and grandchildren.

“You have got to have a calibrated response and we are going to be tough on some things but also going to continue to engage.”

The Prime Minister confirmed changes would be made to extradition arrangements with Hong Kong.

The pound is down against the euro, which hit 19-week highs.

Versus the dollar, sterling changed hands at $ 1.2573 at 0803 GMT, broadly flat on the day, having fallen overnight then recovered from around 0400 GMT.

The FTSE 100 has continued to dip with energy stocks tracking a decline in oil prices amid concerns following the global spike in coronavirus cases.

The commodity-heavy blue-chip index was down 0.9 percent, with BP Plc and Royal Dutch Shell Plc among the biggest drags.

The FTSE 100 has bounced about 27 percent following a coronavirus-driven crash in March, but the pace of gains has slowed since June amid fears of a slower-than-expected global economic recovery.

The Euronext 100, CAC 40, DAX and Swiss Market Index have all fallen this morning.

8.30am update: FTSE plummets on open

The FTSE has dropped sharply on open, falling from yesterday’s close of 6,290 to 6,224 in under an hour.

It marks a drop of more than 1 percent – a worrying start to the day’s trading.