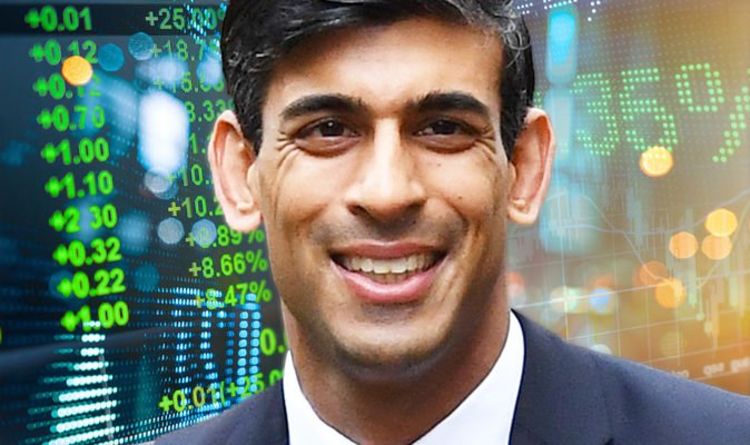 Japan’s Topix benchmark was up 1.8 percent after the country’s central bank said it would buy an unlimited amount of government bonds as part of efforts to support the world’s third largest economy.

The Bank of Japan also said it would quadruple its limit on corporate debt purchases to ¥20tn ($ 186bn).

Traders said the gains across the world show investor optimism is rising around policy decisions from central banks this week, with the European Central Bank, US Federal Reserve and Bank of Japan meeting to set policy.

9.58am update: Boris Johnson ‘wants to get economy moving as fast as I can’ but urges caution

The Prime Minister said outside 10 Downing Street: “I know it is tough, and I want to get this economy moving as fast as I can.

“But I refuse to throw away all the effort and the sacrifice of the British people and to risk a second major outbreak and huge loss of life and the overwhelming of the NHS.”

Sterling has been boosted by improving global risk appetite and hopes that lockdown measures may start to be eased.

Michael Hewson, chief market analyst at CMC Markets UK, said: “Attention will be on him, and in particular the government more broadly, to announce some sort of pathway out of lockdown, as it becomes increasingly apparent how much economic damage is being done to the UK economy.”

Spreadex financial analyst Connor Campbell said: “With countries across the world – notably France, Italy, Spain, Australia and New Zealand – aiming to ease some of their lockdown measures this week or next as they try to find the ‘new normal’, the markets rebounded hard on Monday.

“Though we have no idea when the terms of lockdown will be altered, let alone ended, in the UK, the examples set by its global, and especially European, peers still sent the FTSE sharply higher.

“Climbing close to 100 points, the index neared 5850, pushing it towards a two-week peak.”

The sportswear giant has warned it could make a loss during the second quarter of this year after it missed its earnings expectations in the first three months of the year.

Adidas is expecting to make its first quarterly loss in more than four years for the second three-month period after profit plummeted 93 percent to €65million compared to a year ago.

The coronavirus pandemic is hitting the firm hard, with almost three-quarters of its global stores closed during lockdowns.

This contributed to revenue falling by nearly a fifth in the first quarter but during the current quarter, Adidas is expecting sales will fall at more than twice that rate.

Adidas chief executive Kasper Rorsted said in a statement: “Despite the current situation, I am confident about the attractive long-term prospects this industry provides for Adidas.”

China’s industrial firm saw profits plunge 34.9 percent last month compared to a year ago, the National Bureau of Statistics has warned, as the coronavirus outbreak continues to smash the country’s huge economy.

The latest figures come after China reported its first contraction in economic growth since the 1970s, with GDP falling 6.8 percent in the first quarter of this year.

The bank is raising $ 2.2billion in capital and slashing its dividend by almost two-thirds to protect against a huge hit to the economy from the corcoanqvirus pandemic.

NAB chief executive Ross McEwan has told investors the bank is taking steps to manage the “rapid and unprecedented upheaval” caused by the pandemic.

This has already played a large part in profits plunging by half compared to last year.

He said: “Measures to contain the spread of Covid-19 have had a sudden and materially negative impact on economic activity.

7.38am update: Asia-Pacific sticks begin week on the front foot

sia-Pacific stocks have been on the rise this morning, with Japan’s Topix up 0.5 percent, the Kospi in Seoul up 0.3 percent higher and Australia’s S&P/ASX 200 edging up 0.1 percent.