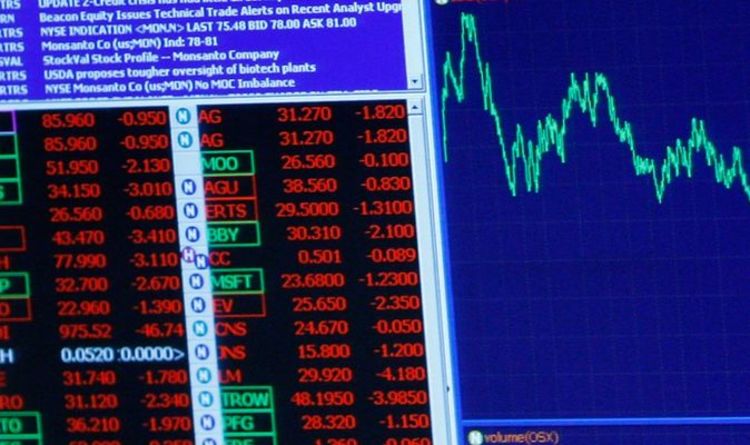 All three major US. stock indexes were range-bound and swung back through much of the day as investors struggled to interpret the impact of US employment data without any guidance from corporations on their earnings.

On the whole, markets have struggled this week due to concerns about a possible fresh wave of contagion, prompting some investors to become less optimistic about how quickly the global economy can recover for the pandemic.

The pound fell below $ 1.24 today, as FX markets digest yesterday’s moves by the Bank of England to introduce £100billion more into the economy.

11.10am update: US stock futures rally

US stock futures rose ahead of Wall Street’s open.

Dow futures climed 1.1 percent, while the S&P was up one percent.

Economic news today has been mixed but seemingly traders are hanging on to hope for a fast recovery.

Reacting to this morning’s debt data, Alex Tuckett, senior economist at PwC, said: “This morning’s Public Sector Finances data show the government continuing to borrow money at a record rate. Data for both Public Sector Net Borrowing (PSNBx) and Cash Requirement were even higher than April’s record. Just two months into this financial year the public sector has already borrowed £103.7billion; the OBR expect this to rise to nearly £300billion for 2020-21 as a whole.

These numbers continue to show the dramatic effect of the Coronavirus crisis on the UK economy; tax receipts were down £8.4bn compared to May last year, with VAT revenues collapsing by 46%. But the greatest effect on borrowing came from an increase in spending (more than £29bn higher than May 2019), reflecting the government’s various support schemes for the economy.

In the near term, there are signs the economy is recovering as the country re-opens, and this should boost tax receipts. However, these figures remind us that Chancellor Rishi Sunak faces a difficult backdrop to any summer fiscal event, at which he will want to look for ways to help the recovery gather momentum.”

Energy traders have gained confidence off the back of OPEC members’ compliance with output cuts.

Despite this, the pandemic will still be weighing on their mind, and this sensitive commodity could prove volitile.

9.00am update: Stocks edge up as investors gain confidence

After a rocky week, stock markets have been buoyed again by monthly data.

The Europe-wide Stoxx 600 index rose 0.6 percent in early trade, too.

Wirecard shares droped another 21 percent this morning, after damning reports surfaced in the Financial Times.

Since the beginning of this week shares have plunged around 65 percent on news that €1.9billion had disappeared from its audit.

8.00am update: UK debt to outpace GDP for first time since the aftermath of World War Two

New data releases from this morning have revealed that UK debt is due to outstrip its GDP for the first time in decades, as borrowing has surged.

The last time this happened since 1963.

These figures may be adjusted, as they are based partly on forecasts made before the virus hit.

As the economy lurches towards fully reopening, retail sales volumes partly rebounded in May with an increase of 12 percent when compared with the record falls experienced in the previous month.

But sales were still down by 13.1 percent on February before the impact of the coronavirus pandemic.

Food sales propped up the numbers, as they saw a strong increase of 42 percent.

While there was a strong increase in the volume of fuel sales in May 2020, levels still remain 42.5 percent lower than February 2020, before government travel restrictions were in place.

This is Lucy Harley-McKeown taking over from Grace MacRae.