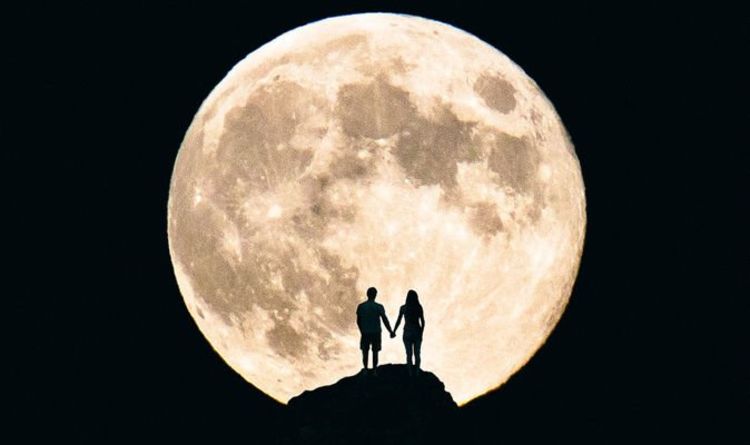 According to the Royal Observatory Greenwich in London, there is a well-documented fascination with the Moon’s sway over our lives.

The ancient Mesopotamians, for instance, believed lunar eclipses threatened the lives of their kings.

In Ancient Greece and Rome, on the other hand, girls were given crescent-shaped pendants to ward off evil spirits.

And by the 16th century, the Moon’s position was tracked by physicians to determine how it would affect their patients.

READ MORE: What is the spiritual meaning of the Flower Moon?

According to Louise Devoy, a curator of Royal Observatory Greenwich, these superstitious practices were considered “essential part” of medicine.

She said: “They used the black spokes on these rotating paper discs – ‘volvelles’ – to keep track of the Moon’s position.

“The waxing phases of the Moon were thought to enhance the benefits of bloodletting.

“In contrast, the Full Moon was thought to intensify a patient’s fever.

“Similarly, apothecaries created herbal remedies using watery plants that were thought to be influenced by the Moon.”

Does a Full Moon affect humans?

There is no scientific evidence to support the claim a Full Moon can affect our mood or health.

“Alleged relations between phases of the Moon and behaviour can be traced to inappropriate analyses, a failure to take other (e.g., weekly) cycles into account, and a willingness to accept any departure from chance as evidence of a lunar effect.”

Another study conducted in 2013 observed 33 volunteers to determine whether a Full Moon affected their sleep.

However, once the study was published, two further experiments failed to reproduce the study’s results.

For the most part, scientists agree the Moon does not have any significant impact on our daily lives.

Niall McCrae, author of The Moon and Madness, said: “We can be confident that the Moon does not have a noticeable impact on most people’s lives most of the time, but we cannot rule out the possibility of its role among various environmental factors that might affect our sleep, moods and vitality.”

Richard Dunn also wrote in the book the Royal Observatory’s book The Moon: “Convincing scientific evidence that the Moon affects human biology or mental health has not yet been found.

“Nevertheless, its more obvious effects on Earth – through light and gravity and due to its regular cycles – have exerted a powerful influence on how humans have led their lives, whether through the ordering of time, the ability to navigate, or attempts to determine what the future might hold.”