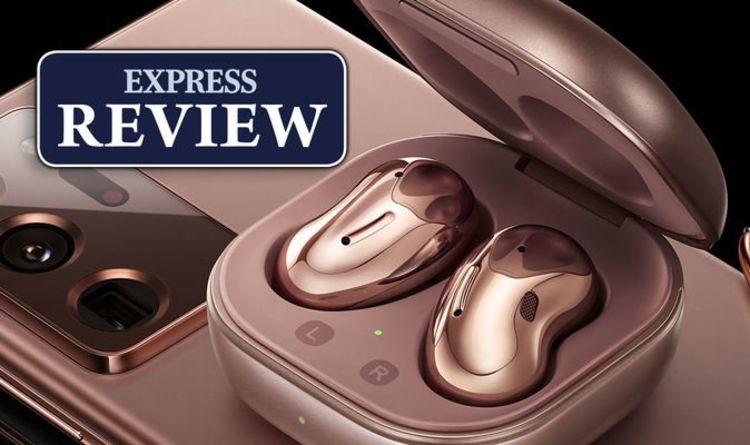 Samsung already makes some of the longest-lasting wireless earbuds money can buy, but now the Korean firm is back with something very different. The new Galaxy Buds Live don’t only feature a radical design but they also come with noise cancelling technology – something that Samsung’s recently released Galaxy Buds+ were criticised for not including.

Wireless earbuds are launching onto the market at a ferocious rate and it’s nice to see Samsung release a product that looks totally unique. There’s no stem dangling from your ear and they’ve even been nicknamed Galaxy Beans thanks to the fact that they resemble, you guessed it, a kidney bean. You can even buy them in a very bling Mystic Bronze if you really want to stand out from the crowd.

We’ve had them playing our favourite tunes for the past week there’s plenty to like about the Buds Live including the way they fit in your ears.

This bean-shaped design may look unconventional as there’s no tip to slot deep into the ear canal.

Instead the Buds Live simply rest inside the ear which may sound a bit strange but it actually works really well and they feel incredibly comfy to wear.

Surprisingly, they never feel like they are going to fall out although we’re not entirely sure we’d trust them to stay put when pounding away on the treadmill.

READ MORE: Pixel Buds review: Google’s back but is it enough to challenge Apple’s AirPods?

We’ve had no issues listening to endless playlists and different genres of music – in fact, the whole experience has been hugely enjoyable.

What should boost things further is noise-cancelling technology which Samsung has included for the first time. On paper, this is great news but sadly the experience falls well short of expectations.

A large amount of background audio still leaks through and, unlike Apple’s AirPods Pro, don’t expect these buds to drown out the din on your next long-haul flight.

In fact, via the Galaxy Wear app, you can turn actually ANC on or off and it’s really hard to tell the difference between the two which is hugely disappointing.

We’re not sure if Samsung is working on an update to solve this problem but, right now, there are definitely better earbuds on the market if this sound blocking feature is top of your wish list.

Although the noise cancelling isn’t great, battery life is pretty decent with them lasting for well over five hours on a single charge – you get even longer with ANC turned off.

Once flat you simply place them back in the very neat little case for a refill with a fast charge option adding an hour of playtime after just five minutes.

This pocket-sized box can also be charged wirelessly and provides a total of 21-hours of playback.

Other nice features include touch controls which allow you to pause and skip track and even turn up or down the volume via a long press on either bud.

There’s also a very comprehensive app where you can change audio settings, turn on audio notifications and even find the Buds Live if you happen to lose them.

You can’t change all of the touch controls but the app does have different options for the long press on the Buds.

This can be changed to switch on the noise-cancelling technology, adjust volumes or summon the Bixby assistant.

One final thing to note are the colours and price. As we mentioned earlier, the Buds Live come in a very bling Mystic Bronze but there are also more subtle Mystic White or Mystic Black options as well. All cost £179 which puts them at the top end of the market.

As an example, the Galaxy Buds+ which last for over 10 hours on a single charge cost £159 and the new OnePlus Buds can be yours for under £100.