Game of Thrones movie: Will there be a GoT film? George RR Martin drops massive hint 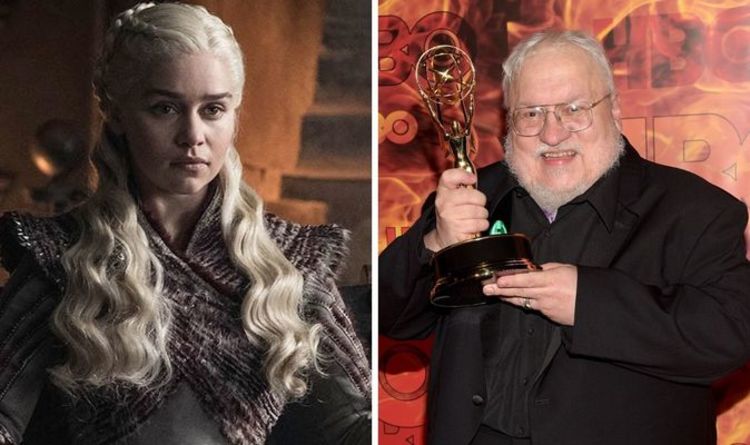 In a recent post on his Not a Blog website, Martin confirmed his current work is focusing on writing The Winds of Winter.

He said: “I am still up in the mountains, doing the social distancing rag, and writing WINDS OF WINTER.

“I have good days and bad days, but I am making progress.”

Martin then dropped a bombshell about the production of his upcoming Game of Thrones prequel series, House of the Dragon.

While discussing this, he also suggested there could be another huge project in the works – a Game of Thrones film.

Martin continued: “Hollywood has largely closed down as well, at least as far as actual production is concerned.

“(If this pandemic goes on long enough, I wonder if the pipeline will go dry, and we will start to run out of new films and television shows. If so, sheltering in place is going to get an order of magnitude harder.

“Television right now is doing a lot to keep us all sane — and no, not the news, which has the opposite effect).

“But while nothing is being filmed right now, development is continuing apace, since writers can still write at home.

“The only thing I am writing myself is THE WINDS OF WINTER, as I have said many times… but with my producer’s hat on, I am still involved in a number of exciting new shows for HBO, and a few film projects as well.”

For fans fearing Martin is pausing work on The Winds of Winter to make a film, he confirmed this is not the case.

However, clearly he is also working on something exciting, which may be a Game of Thrones film.

In fact, Martin said he was involved in “a few film projects” so it could be more than just Game of Thrones is coming to the big screen, or multiple films of the series are in the works.

Annoyingly for fans, Martin stopped there, and gave hints about the prequel series, House of the Dragon, before sharing a warning about his film reveals.

He added: “When and if any of these make it to the screen, well, that’s always the question… but I do know that Ryan Condal and his team are roaring ahead on the scripts for HOUSE OF THE DRAGON, and that one has a full season’s order from HBO.

“As for the other stuff I may or may not be involved in, I could tell you, but then I’d have to kill you all.”

Let’s hope before anyone has to die for asking questions, Martin will have revealed more about his film projects.

- Advertisement -
Facebook
Twitter
Pinterest
WhatsApp
Linkedin
ReddIt
Email
Tumblr
VK
Previous articleHow Kate Middleton's 'breath-taking modesty' as come to the fore amid coronavirus crisis
Next articleHeart attack warning: The spots on your skin you shouldn’t ignore – are you at risk?