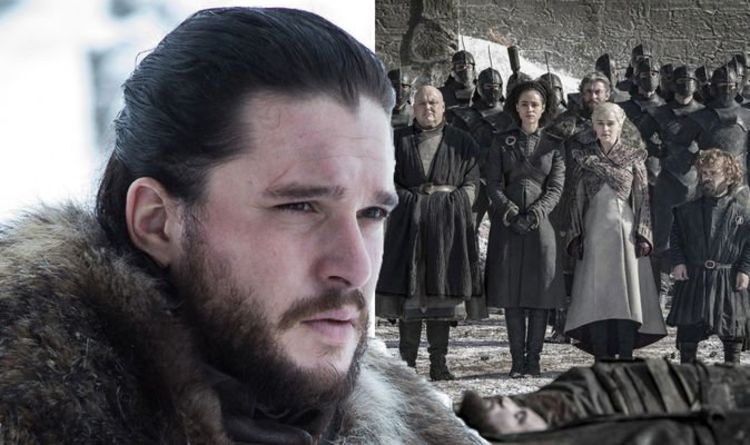 The last decisive episode of the HBO fantasy epic detailed the ferocious final battle to take control of the Iron Throne. Daenerys (Emilia Clarke) goes mad with power and is tragically killed by Jon Snow (Kit Harington), however one screenwriter reveals that Game of Thrones may have ended differently had a certain character remained by her side.

The series finale of Game of Thrones was certainly vast in scale, and wrapped up several character acts after years of build-up.

Jon is sentenced to return to the Night’s Watch, whilst Tyrion (Peter Dinklage) forms a more democratic council for Westeros.

Unfortunately the road to peace for the realm was tarnished by a lot of bloodshed, and in true Game of Thrones fashion many fan favourite characters lost their lives throughout the final season.

Among them was Daenerys’ loyal knight Jorah Mormont (Iain Glen), who was fatally wounded defending his Queen from the wights, dying in her arms in the third episode of the final season, The Long Night.

READ MORE: Game of Thrones: Who is Essie Davis in the series? Meet Lady Crane

However, an interview with Entertainment Weekly revealed that Jorah was initially intended to survive his ordeal against the battalion of undead forces.

Screenwriter Dave Hill penned the premiere for season eight and contributed to the series from season five onwards.

With those credentials in mind he revealed: “For a long time we wanted Ser Jorah to be there at The Wall in the end.”

Although it’s unclear how far his formidable combat skills would have gone in reducing the chaos of the final battle, fans would definitely have been happy to see him one last time before the season’s closure.

Dave continued: “The three coming out of the tunnel would be Jon and Jorah and Tormund.”

Tormund (Kristofer Hivju) was able to escape the Battle of King’s Landing unscathed, and joins Jon in the aftermath to lead Ghost and the rest of the Wildlings north of the Wall.

He added: “But the amount of logic we’d have to bend to get Jorah up to The Wall and get him to leave Dany’s side right before [the events in the finale]… there’s no way to do that blithely.”

Fans already criticised the final episodes for rushing the story’s narrative through vital moments, so the illogical reappearance of Jorah could have been the final straw.

Plus, Jorah’s ending was a rare touching moment for the last season so it would have been a shame to omit the crushing scene.

Actor Iain Glen additionally commented that he was happy for his character to be killed midway through the eighth season.

Iain said: “There’s a sweetness in that because Jorah will never know what she did.”

In her quest for power, Daenerys became corrupted by the temptation of the Iron Throne and razes King’s Landing to the ground.