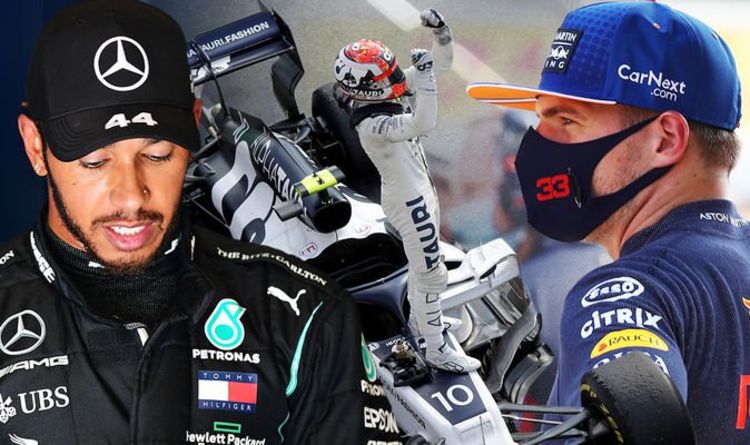 Lewis Hamilton had been cruising at the front of the grid in the Italian Grand Prix but then the drama took over at Monza which turned the race on its head. Sebastian Vettel retired early in the race after suffering a break failure but it was his Ferrari team-mate’s retirement which had a domino effect for everyone else.

Leclerc smashed into the tyre barrier at Parrabolica leading to the race being red flagged on lap 27.

During the short break, Hamilton was handed a 10-second penalty for pitting when the pit lane was closed.

That would eventually put Hamilton at the back of the grid and end his chances of winning the race.

Max Verstappen was then presented with an opportunity to cut the gap to Hamilton in the driver standings but he was forced to retire his car with a mechanical issue.

But it was all about the fairytale story at the front of the grid.

Pierre Gasly benefitted most from the safety car, red flag and Hamilton’s penalty as he raced into the lead with Carlos Sainz battling the Alpha Tauri for their first win in F1.

Sainz was giving it everything to the final lap to try and snatch the win but Gasly was able to hold on to seal a famous victory.

Utterly bonkers race at Monza with the big teams suffering all kinds of problems but it presented a brilliant race for the usual midfield runners.

Full credit to Alpha Tauri and Pierre Gasly for taking full advantage of all the drama and McLaren as well with Carlos Sainz pushing Gasly all the way.

Hamilton now up into the points after passing Raikkonen with Perez just ahead of him. Is this a strange example of what a reverse grid race would look like?

But for now it’s all about the battle at the front now. Gasly is just 2 seconds ahead with Sainz gaining every lap.

Hamilton has 10 laps to try and work his way through the field now. He’s up in 12th and Mercedes think he could get up to sixth.

Lewis Hamilton gets past Alex Albon and now he’s got Russell and Grosjean just in front of him.

Sainz is slowly catching Gasly out in front. Bottas struggling to get past Norris. Anybody else able to keep up?

Gasly still leads ahead of Raikkonen but Sainz gets the move on the veteran! Brilliant driving from the two into the first chicane.

Disaster for Red Bull now! Max Verstappen would have had a huge opportunity to take advantage of Lewis Hamilton’s penalty but he’s OUT!

Clean start from everyone and Raikkonen is up there battling like the days of old!

Hamilton into the pits and he’ll go to the back of the pack.

This is going to be absolutely bonkers! Hamilton will go to the back of the pack with his penalty with the top three going to be Stroll, Gasly and Raikkonen. All set for a fascinating finish!!

And the race is red flagged. Marshalls have a lot of debris they need to clear from the track.

LEWIS HAMILTON HANDED 10 SECOND PENALTY! That will likely put him right at the back of the pack!

HUGE CRASH!! Charles Leclerc smashes into the tyre wall at the final corner.

What drama that safety car has caused! Lewis Hamilton could well get a penalty for pitting when the pit lane was supposedly closed.

Carlos Sainz had played by the rules and he ended up back in eighth.

Now Kevin Magnussen is out. He pulls over on the side of the road. And the safety car is out! A lifeline for Bottas

Lewis Hamilton already has this race sewn up. He’s 10 seconds clear of Sainz. A nice leisurely drive for the six-time world champion around Monza then.

Nightmare for Sebastian Vettel! The Ferrari driver is slowing down and he smashes into the polystyrene marker boards at the first chicane!

He’s on the radio saying his brake line has EXPLODED! That’s his race over.

Plan B for Bottas now but he’s already 7 seconds behind Hamilton and that’s increasing with every lap.

Elsewhere, both Ferrari drivers failed to move up with Leclerc in 13th and Vettel 17th.

Bottas complaining of a puncture on team radio but it looks as though he’s going to stay out. What a dreadful start for Bottas!

Dreadful start for Bottas as Carlos Sainz gets off to a better start and he drops even further behind Lando Norris!

Lewis Hamilton way out in front and Bottas slips even further to behind Sergio Perez and Daniel Ricciardo with Max Verstappen now on his tail.

LIGHTS OUT AND AWAY WE GO!

Having too much sugar in the blood for long periods of time can cause serious health problems if it's not treated. Hyperglycaemia can damage...
Read more