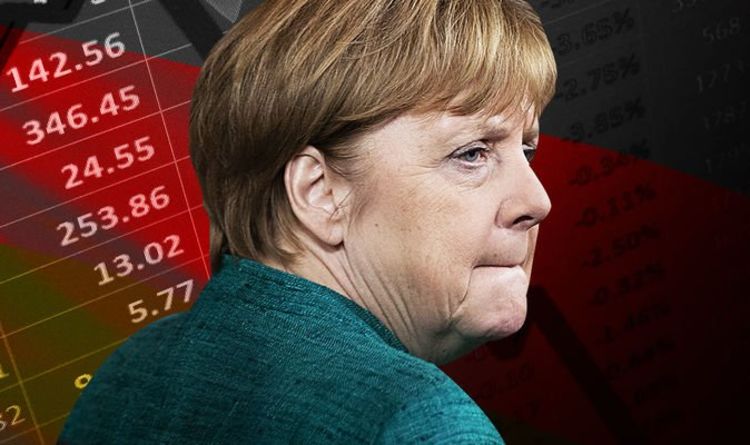 The slump in the three-month period would be more than double that experienced in the first quarter of 2009, when Europe’s biggest economy was plunged headfirst into the financial crisis in 2009. Germany has reported nearly 110,000 confirmed cases of coronavirus and almost 11,000 deaths – fifth only behind the US, Spain, Italy and France. The country is currently in lockdown in a desperate attempt to contain the spread of the killer coronavirus, with thousands of schools, shops, restaurants and sports facilities closed as production grinds to a halt.

But according to forecasts from Germany’s leading research institutes, the country is facing the deepest slump in economic power ever measured within a quarter, with unemployment and public debt set to skyrocket.

The economy is set to collapse by a huge 9.8 percent in the quarter, after it shrank 1.9 percent between January and March.

The report from the institutes warns: “This is the strongest decline in Germany ever recorded since the beginning of the quarterly accounts in 1970 and more than twice as large as that during the world financial crisis in the first quarter of 2009.”

Timo Wollmershaeuser, economist at the Ifo institute — one of the think tanks involved in producing the report – warned production could ultimately be “frozen”.

He also warned the recession will be “deeper and the recovery slower”, adding the German government will face a huge uphill battle to stop companies going bust.

Mr Wollmershaeuser said: “It is not unlikely that the crisis will drag on longer than expected and lead to production being frozen.

“In this scenario the recession will be deeper and the recovery will be slower. It will also be more difficult for the government to prevent businesses from going bankrupt.”

The institutes involved in producing the report also warned the unemployment rate in Germany is set to surge to 5.9 percent at its peak in 2020 from the most recent figure of 5.1 percent.

That would equate to nearly a quarter-of-a-million of additional people out of work.

They said the number of people on short-time work – a form of state aid that allows employers to switch employees to shorter working hours during an economic downturn to keep them on the payroll — is likely to rise to 2.4 million from just 100,000.

That would be almost be double the number of employees who were on the scheme in the spring of 2009 during the midst of the last global financial crisis.

But the researchers said if the economy is able to recover quickly, the impact from the coronavirus crisis could be managed, with the economy growing strongly again by 5.8 percent in 2021.

If the government continues to take extensive aid measures in an attempt to protect the economy and jobs, debt could rise to over 70 percent. This could fall to around 64 percent if the economy is able to recover quickly.”

However, the researchers warned that if lockdown measures remain in force well beyond April 20, or if further strict measures have to be put in place later this year, the situation could continue to deteriorate at an alarming rate.

The report warned the damage of such measures “should increase disproportionately with increasing duration”.

The Federal Government’s Council of Experts had said at the end of last month the most likely scenario was a five-week lockdown and a subsequent short recovery phases.