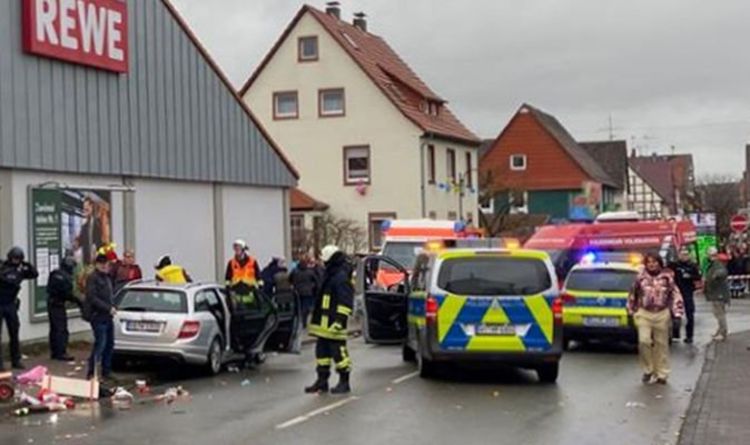 A silver Mercedes station wagon drove into the crowd at 2.30pm local time (1.30pm GMT) this afternoon during a procession in Volkmarsen, a town in the Waldeck-Frankenberg district in northern Hesse with a population of 7,000. The driver of the car was arrested, the police in Kassel said, while refusing to confirm whether of not they were treating it as an accident, and stressing they did not believe there to be a “political motive”. Multiple reports have suggested similar events throughout the region have now been put on ice as a result.

A police spokesman explained: “We cannot say yet whether it was a medical emergency or a technical failure or if at worst there was intention behind it.”

Police spokesman Henning Hinn later added: “There were several dozen injured, among them some seriously and sadly also children.”

Some of the injuries were life-threatening, he said.

However, German media claim the driver deliberately broke through plastic barriers set up by police around the parade area.

The car had continued driving through the crowd for about 30 metres (33 yards) before coming to a halt in the incident, an eyewitness told broadcaster Hessenschau.

Police cars and ambulances rushed to the scene in Volkmarsen, 263 miles, 423 km west of Berlin.

Carnival is hugely popular in parts of western Germany, especially in Rhineland cities such as Cologne and Duesseldorf, where festivities peak on “Rose Monday” with tens of thousands attending street parades featuring comical or satirical floats in a traditional festival prior to the start of Lent.

One eye witness told German newspaper Bild he had seen at least 30 injured people, with the newspaper subsequently putting the total at double this figure, roughly one third of them seriously.

Nobody involved, neither those who have been injured nor the driver, has yet been identified.

Dirk Richter, police spokesman in the nearby city of Kassel told Welt TV: “Everything we have available from the Kassel area is there.”

Amateur pictures published online showed police officers standing next to a silver Mercedes-Benz car which appeared to have been involved in the incident.

The Mayor of Volkmarsen, Hartmut Linnekugel, and District Administrator Dr Reinhard Kubat, are also at the scene.

All similar parades in Hesse have been suspended as a precautionary measure.