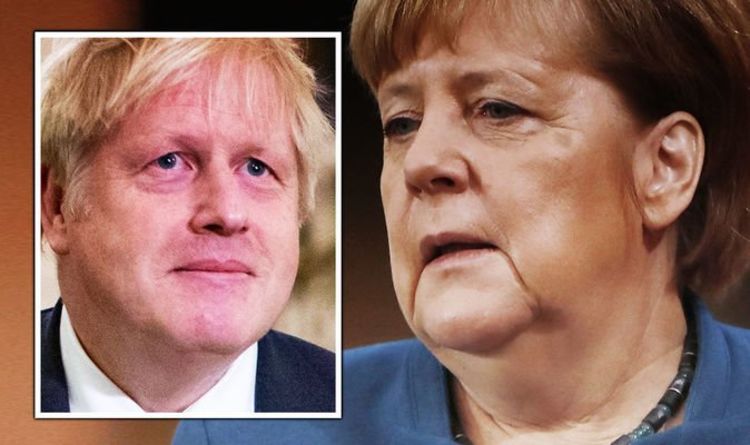 Andreas Kluth, from Bloomberg, said a “sombre feeling” is spreading across Berlin as the “long-term implications of Brexit sink in”. The political expert said after Ireland, Germany “has the most to fear” from the UK’s exit from the bloc.

So much so, Germany is likely to push for a German-British Friendship Treaty in a desperate bid to keep close to the UK.

He said: “A sombre feeling is spreading among Germany’s elites, as the long-term implications of Brexit sink in.

“Of the European Union’s 27 member states, Ireland obviously has the most to fear from the UK’s departure. But Germany may be second.

“That’s because Brexit changes not only the remaining EU but also Germany’s role within it – and in ways the Germans have for half a century been trying to avoid.”

He said Britain were key to supporting German in the 1950s because they had a different vision to France on European integration.

Mr Kluth said Germany and the UK were more “naturally aligned in values than the French” and Berlin and Paris “have always had clashing economic traditions”.

READ MORE: German Chancellor’s biggest rivals come back to haunt her after AKK

“The Brits were basically a smaller, more familiar – and European – version of the Americans, and thus a welcome counterweight against the French.”

Mr Kluth said Britain’s decision to unshackle itself from the bloc means the “centre of gravity in the EU has now shifted”.

He added: “The UK, the north (defined as Germany, Sweden, Denmark, Finland, Ireland and the Netherlands) had a blocking minority of 36.8 percent.

“Without the UK, that share has dropped to 27.8 percent, too small for a veto.”

He said Britain’s presence in the bloc “mitigated the dilemma” of the German Question – a debate in the 19th century, especially during the Revolutions of 1848, over the best way to achieve the unification of Germany.

“Having the UK in the EU mitigated that dilemma. Britain was weighty enough – economically, demographically, militarily – to balance Germany, France and the continent.

“And nobody was happier about being balanced than the Germans, for the last thing they want is to be forced to lead, knowing that this will invariably rekindle old resentments against them.

“Brexit means that balance is gone again. The German Question is back.”