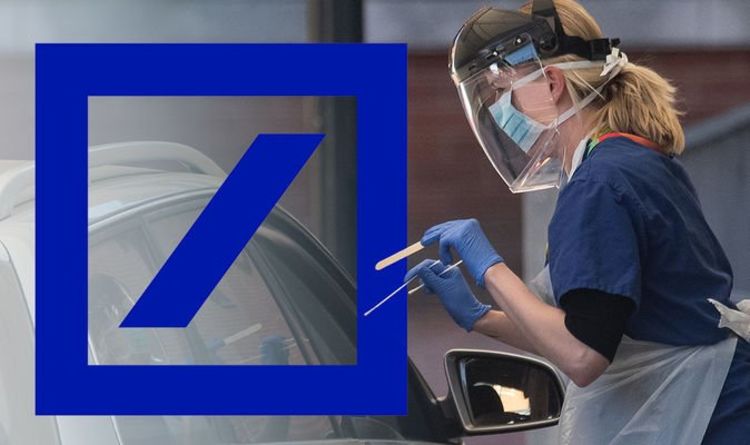 Deutsche Bank said the UK’s poor coronavirus testing capacity means that it is likely one of the world’s last to exit the stringent lockdown that has so badly hammered its consumption-based economy. The German bank said the UK would be hit by a “double whammy” in terms of health and economic consequences in the face of COVID-19.

Deutsche Bank’s Oliver Harvey said in a note to clients: “The UK is lagging behind almost any medium to large economy globally when it comes to coronavirus tests.

“This will materially impact the government’s ability to pursue a ‘test and trace’ approach when it comes to easing the lockdown.”

British Prime Minister Boris Johnson, who is recuperating at his country residence after battling coronavirus, is facing criticism from opposition politicians and some epidemiologists for reacting too slowly to the coronavirus outbreak.

He has faced calls for an independent inquiry into the government’s handling of the outbreak after ministers struggled to explain shocking death rates, limited testing and reported shortages of protective kit where it is most needed.

Health Secretary Matt Hancock has promised to get 100,000 per day tested by the end of April, though just 22,814 tests were carried out on April 21 – the latest day for which data is publicly available.

READ MORE: EU could take MONTHS to come up with coronavirus plan to save bloc

He added: “The UK appears to be caught in a double whammy.

“On the one hand, a less developed exit strategy than many other developed economies and question marks over its eventual execution, and on the other an economy that is highly exposed from a sectoral perspective to lockdowns.”

His remarks come as Europe’s largest economy Germany moved to lift restrictions gradually, with larger stores allowed to open, such as furniture and homeware chain Ikea in the western state of North-Rhine Westphalia.

Shops of up to 800 square metres, as well as car and bicycle dealers and bookstores, were allowed to reopen this week.

Germany’s lockdown took effect on March 17 and Angela Merkel’s government has warned social distancing rules will remain in force until at least May 3, with aims to start re-opening schools the following day.

But today Mrs Merkel said she is worried that Germans are slacking off their social distancing efforts after the federal and regional governments agreed to reopen shops this week.

Germany has the fifth highest COVID-19 caseload behind the United States, Spain, Italy and France, but has kept fatalities down thanks to early and extensive testing.