A massive wall of dust from a giant sand storm has been filmed swallowing entire towns across northern India. In the latest sand storm footage, a wall of dust can be seen approaching India’s historic Jaisalmer city as local witnesses scream in panic. The so-called Golden City of India is prone to deadly dust storms that can surround the area. 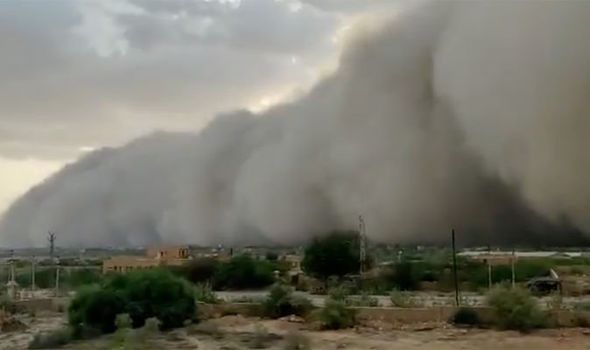 The apocalyptic sandstorm can be seen engulfing the city before turning the sky orange and blocking out the sun.

Witnesses report that “day became night” as soon as the sandstorm stuck the city on Wednesday.

Local residents watched the weather phenomenon from their roofs while capturing the moment. 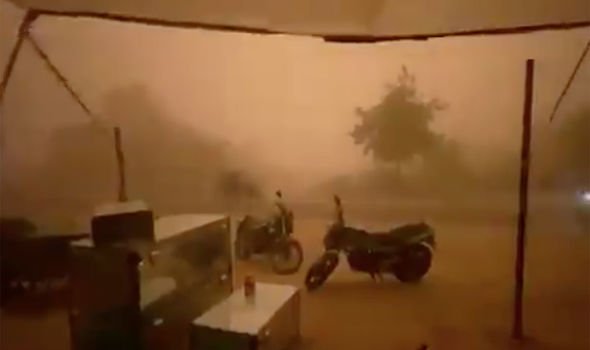 India: The apocalyptic sandstorm then engulfed the city, turning the sky orange and blocking out the sun (Image: IG)

Another witness tweeted: “Dust storm in #Jaisalmer today evening.. Never seen anything like this before.”

The videos quickly went viral, recording thousands of views online from around the world.

On the day, Jaisalmer was one of the hottest temperature spots in India, with a recorded temperature of 43.1C.

A similarly terrifying sand storm stuck the city back in May.

At the time, part of the historic Jaisalmer Fort – a hilltop citadel – was even damaged by the gusty winds.

The Jaisalmer Fort is UNESCO World Heritage Site, and is also known as the Golden Fort or Sonar Quila.

The city is also major tourist attraction for its sand dunes.

In May, the massive sandstorm reduced visibility accross the area in dramatic fashion.

The sandstorm is said to have been so large it could be seen up to 230 miles away.

In 2018, a series of fierce dust storms left more than 100 dead across the same northern region of India.

Many of those killed died when their houses collapsed in the middle of the night after being struck by intense bursts of lightning.