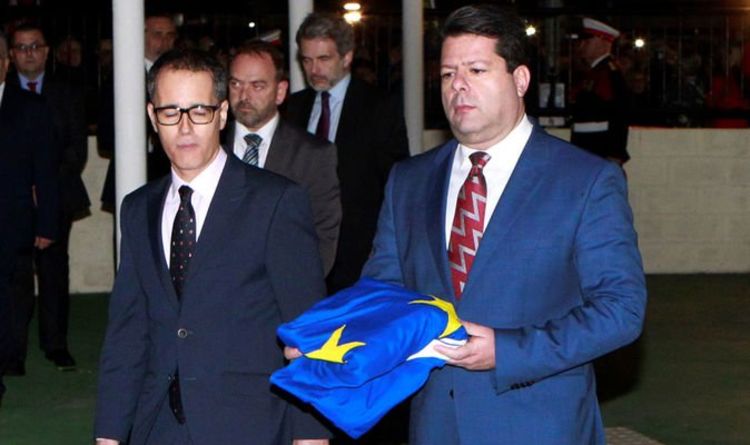 And he also took a swipe at Spain, accusing Madrid of planning to try and frighten Gibraltarians in future trade talks. Gibraltar is poised to mark its departure from the EU with a short ceremony at midnight local time (11pm GMT), which will be screened live by broadcaster GBC Television.

The event will take place at the three flagpoles at the northern end of Gibraltar, yards from the land border with Spain and hence the EU, when the European Union flag will be lowered to the sounds of Ode to Joy, before the flag of the Commonwealth is raised to the tune of God Save the Queen.

Gibraltar voted overwhelmingly to remain in the EU in the 2016 referendum, while Spain has never relinquished its sovereignty claim over the British overseas territory, which has been in British hands since 1713’s Treaty of Utrecht.

In a pre-recorded address to Gibraltarians broadcast by GBC at 8.30pm local time (7.30pm GMT), Mr Picardo said: “Tonight, although we are strongly and rightly confident that we will continue to prosper and thrive in the future, it is right that we should reflect our genuine sadness in leaving this imperfect Union.

“Because I must also record that despite our enthusiasm for the EU, we have often felt let down and unprotected by its institutions.

“And as we move forward, if the EU take a line in relation to Gibraltar which is not inclusive of us, the EU will have failed to understand why the UK is leaving.”

Gibraltar’s future remains uncertain amid the likelihood of Brussels siding with Spain in respect of any future disputes centred on the Rock’s future.

He stressed: “From me and from the Deputy Chief Minister and all our Cabinet colleagues, let me assure you that we will work to deliver agreements on future relations with Europe that will seek to preserve for generations to come as many as possible of the freedoms and opportunities as we have enjoyed.

“To do so, we will have to work harder this year even than in the years since the referendum.

“But you know that we will have the commitment, the energy and the ability to navigate the coming negotiations in a way that is economically and politically safe for you.”

In a pointed reference to Gibraltar’s neighbours, he added: “In doing so, as the negotiations progress, be careful not to take at face value much or any of what you hear in the Spanish press or media.

“Do not fall into the trap of allowing your views to be fixed by what you might read or hear which is designed to dupe a domestic audience.

“Much will be said to seek to divide us or make you fear the progress or potential outcomes of the negotiations.