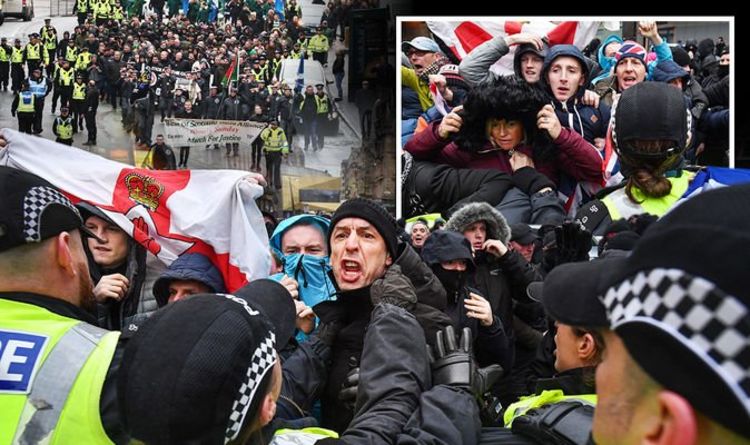 Two people have been arrested and a police officer injured during a republican march in Scotland. Hundreds of people took part in the procession commemorating Bloody Sunday through the city this afternoon, with a counter-protest also taking place. One officer suffered injuries as a result of missiles being thrown and two people were arrested for “minor disorder offences”.

Chief Superintendent Mark Hargreaves said: “We can confirm that the procession concluded at its destination shortly after 1pm without significant incident.

“Officers dealt with minor disorder, including missiles being thrown, which resulted in minor injury to a police officer.

“The procession was stopped a number of times as a result of protest activity to mitigate any further incidents, ensure the safety of all persons involved, and the wider community.

“Two people have been arrested for minor disorder offences.”

The march to remember those who lost their lives was organised by the West of Scotland Band Alliance and set off at 11am.

There was a large police presence to prevent disturbances and the procession was paused on several occasions.

Bloody Sunday was one of the most significant events of the Troubles because many civilians were killed by forces of the state, in full view of the public and the media.

Another former soldier said: “It’s not just about one individual, it’s about many individuals and about the future.

“It’s not just about Northern Ireland but any conflict we’ve been involved in and could be involved in.”

His friend, 58, who served in Northern Ireland in the Navy in the 1990s, said: “What really gets me is that they’ve brought back Diplock courts – Soldier F is facing trial by a single judge without a jury and no-one should ever be tried without a jury.

Soldier F, who cannot be named for legal reasons, is the only person from the 1st Battalion Parachute Regiment ever to be tried for the deaths of 13 civil rights protesters and one passerby in Londonderry in 1972.

The event was called Bloody Sunday by the papers when news of it broke.

ByA schoolboy had his grandparents smiling with his reaction to them winning £30,000 on People's Postcode Lottery. Lucky Susan Spearman, 68, was one of eight...
Read more
U.K.

ByThe cyclist was taken to hospital with an injured left arm. Sir Keir, 58, exchanged insurance details with the cyclist before heading away from the...
Read more
U.K.

Covid: More than 50 Tory MPs call for 'roadmap' out of lockdown

BySome 40 Conservative MPs representing areas in the north of England, North Wales and the Scottish borders, have publicly signed the letter, including former...
Read more
U.K.