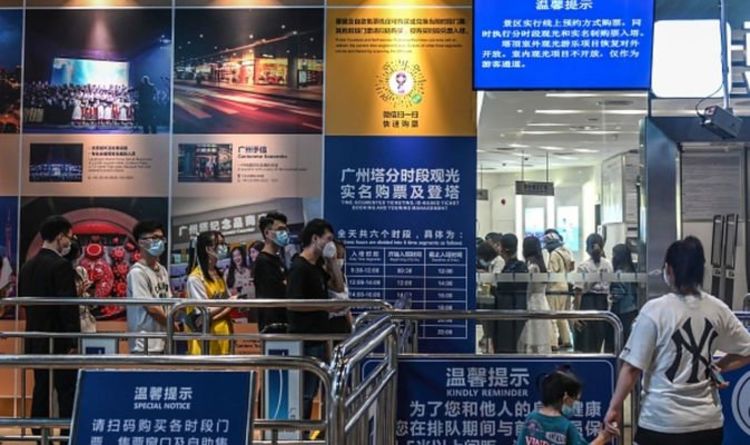 The world’s second biggest economy contracted 6.8 percent according to official data. It’s also the first time China has reported an economic contraction since 1976, when Communist Party leader Mao Zedong’s death ended a decade of social and economic tumult. The financial toll the coronavirus is having on the Chinese economy will be a huge concern to other countries.

Worrying analysis by the Office for Budget Responsibility showed that the UK’s economy will shrink by 35 percent we remain in a prolonged coronavirus lockdown.

The financial watchdog also said unemployment levels will reach 3.4 million and the government’s deficit will also skyrocket to £273 billion – the highest level since the Second World War.

The grim figures came on the same day as theInternational Monetary Fund warned that the world is facing its worst downturn since the Great Depression in the 1930s.

The IMF projected that the global economy would contract by three percent in 2020, an extraordinary reversal from early this year, when the fund forecast that the world economy would outpace 2019 and grow by 3.3 percent.

This year’s fall in output would be far more severe than the last recession, when the world economy contracted by less than one percent between 2008 and 2009 following the financial crash.

China’s figures reinforced the challenging times ahead for many of the world’s economies.

Donald Trump yesterday signalled his intentions to unlock many parts of the USA, the worst hit nation from coronavirus, in a bid to kick start the economy.

Many European countries have also taken tentative steps to release some lockdown restrictions to help get their economies moving again.

Chancellor Rishi Sunak has announced a raft of “unprecedented” measures, including a £330 billion bailout, to prop up the UK’s economy during the pandemic.

But China’s figures show that even economic powerhouses will struggle to recover in the short-term.

Yue Su at the Economist Intelligence Unit, said: “The GDP contraction in January-March will translate into permanent income losses, reflected in bankruptcies across small companies and job losses.”

Last year, China saw healthy economic growth of 6.4 percent in the first quarter, a period when it was locked in a trade war with the US.

In the last two decades, China has seen average economic growth of around 9 percent a year, although experts have regularly questioned the accuracy of its economic data.

Its economy had ground to a halt during the first three months of the year as it introduced large-scale shutdowns and quarantines to prevent the virus spread in late January.

As a result, economists had expected bleak figures, but the official data comes in slightly worse than expected.

China has unveiled a range of financial support measures to cushion the impact of the slowdown, but not on the same scale as other major economies.

“We don’t expect large stimulus, given that that remains unpopular in Beijing. Instead, we think policymakers will accept low growth this year, given the prospects for a better 2021,” said Louis Kuijs, an analyst with Oxford Economics.

Facebook
Twitter
Pinterest
WhatsApp
Linkedin
ReddIt
Email
Tumblr
VK
Previous articleCould Trump Use the Virus to Stay in Power?
Next articleDiabetes type 2 warning: 'Normal' amount of times to pass urine a day – are you at risk?