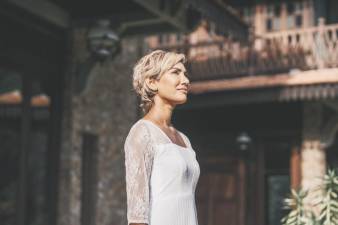 POOVANESWARY Sri Rama, or Poovaa as she is best known, has been active in the local music industry for a while now, but she is suddenly all over the place this year.

The 39-year-old singer-songwriter had Malaysians cheering her when she took part in Asian Dream, a reality show featuring music legend Michael Bolton as a judge and mentor.

She may not have won, but her vocals really introduced her singing talents to a wider audience.

She followed this up with a cover of the late Sudirman Arshad’s 1980s hit song Warisan, which went viral on social media platforms between Merdeka and Hari Malaysia.

Poovaa was previously bestowed with the Best New Artiste award at the 2014 Anugerah Industri Muzik.

She has also represented Malaysia at various music festivals in other countries.

Poovaa was a regular performer at local jazz bars, No Black Tie events and corporate gigs. She has always been writing her own songs and music.

At the time of our conference call, Poovaa was busy working on her first Malay single Karya, which was released at the end of last month.

“I have recorded it, I have done the music video. I am just waiting for post production. I think it will be a few weeks before it will be livestreamed.”

When asked if Warisan was testing the waters for her entry into the Malay music market, Poovaa said: “Actually I wanted to work on a Malay single first and then I decided that I wanted to release some covers first. Then I decided I wanted to do something for Merdeka.

“My team and I discussed it and they suggested Warisan. I listened to it and thought: ‘What a great song’. I spoke to my producer and said let’s do a different take on the song, a little more melancholic, a little more expressive yet sombre in a way, because of the MCO .”

She really did not expect the song to get the kind of positive reaction that it did.

Sudirman is a legendary entertainer and considered to be one of the nation’s most expressive singers. Anyone who covers his songs takes a huge risk of being compared unfavourably to him.

“I was very nervous because it was such an iconic song,” said Poovaa. “The original song was very patriotic. My version was slightly orchestral and slightly toned down a bit.

“For me, the song moved me on a personal level. I was going to sing the song the way I wanted to sing it. I was from a place of emotion. I felt it when I sang the song, especially the chorus. When I hear the chorus my hair stands up.

“It is not because of the way I sang it, it was [because it is] brilliantly written.”

Poovaa not only pulled off Warisan brilliantly, she even received praise from the family of the song’s composer and lyricist Syed Haron Syed Ahmad (he passed away in 2015). Syed Haron’s daughter sent her a message expressing their pleasure, and pointed out that one of the words [in the second verse] was actually supposed to be ‘bertapak’ and not ‘bertapa’.

“She has been trying to correct that for many years, but most singers would just sing it as ‘bertapa’ and not ‘bertapak’.

“She said the rendition was amazing and thanked me for doing the song. So we became friends on Instagram. That touched me as well.”

There was a time an artist could only get so far on their own, and needed the muscle of a major record label to ensure they were marketed and received the right amount of exposure.

Today, with social media, the world is your audience. However as Poovaa points out: “The social media game is a different ecosystem all together. You have to constantly be at it. It is a full time job.

“For someone creative like me who likes to spend most of her time in my music studio, having to post three things a day on Instagram is a bit of work.”

She said that going on social media constantly is good in some ways, as it enables an artiste to reach out to their fans.

She is thinking of hiring a content manager to help in this regard.

Right now, she is focusing on Karya.

“I am going all out with it. I have even hired pubic relations and marketing people to help me infiltrate the Malay market, which is a new market for me. So I need people who are in the scene to put me on the map.

“This is a whole new ball game from what I have been doing for the past ten years. So I thought if I was going to get into it, I better do it the right way, with a proper strategy and plan. I have been working on it with my team for the past six or seven months. ”