Golden Globes 2020: Models and stars descend on after party red carpet – all the gowns 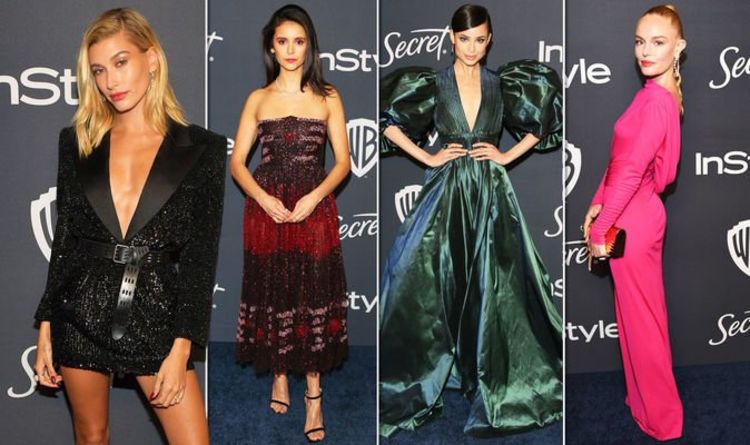 Models such as Hailey Bieber, 23, and Leonardo DiCaprio’s girlfriend Camila Morrone, 23, arrived at the Golden Globes after party tonight.

Nina Dobrev, 30, wore an elegant strapless number in sparkling pink and cranberry hues, while Sophia Bush, 37, wore a baby blue off-the-shoulder wiggle-dress that was nipped in at the waist.

Kate Bosworth, 37, wore a magenta, long-sleeved column gown with a low cowl back.

Who was best dressed on the Golden Globes red carpet?

Lucy Boynton, 25, wore a vintage-inspired silver gown. The dress had a high, pie-crust collar neck and large details on the sleeve and bust. Lucy added silver hair clips and wore silver platforms, too.

Gwyneth Paltrow, 47, wore a sand-coloured sheer down with a racy matching bra.

Jessica Alba, 38, wore a metallic silver and pink gown. The dress has a pretty tiered skirt.

Paris Hilton, 38, upped the ante in a sheer gown with silver stripes, while Shay Mitchell, 32, wore a nude dress with a pink and black floral design and statement sleeves.

Billie Lourd, 27, wore a 70s disco-inspired look. The co-ord gold and black stripe look featured a skirt and a bra top. She finished the look with vintage-inspired blue eyeshadow and a red lip.

Which films have been nominated for the prestigious awards tonight?

The Best Motion Picture for Drama Award could go to either 1917, The Irishman, Joker, Marriage Story or The Two Popes.