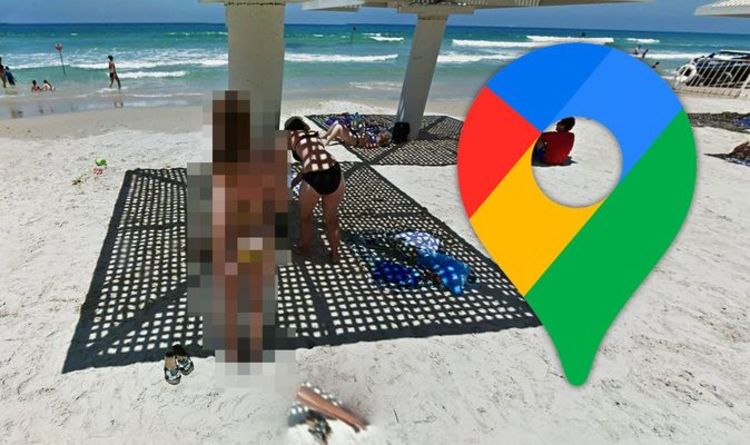 Since its introduction to the world in 2007, Google Maps Street View has unleashed a world of mystery and oddities. The platform is frequently used by users around the globe as they search for sightings ranging from the weird to the wonderful.

However, one internet user recently discovered a street view image of a woman caught in a particularly awkward position.

The scene unfolds on a beach near the Israel National Trail.

The popular beach is filled with people, as many lay out on the sandy beach and take in the rays on a particularly sunny day.

Standing underneath a hut is two women – one on the right-hand side and wearing an all black bikini and another in a black and yellow two piece.

As they seek shade amid the burning sun, one woman can be seen hunched over while another appears to be reaching around the back of her bikini briefs to pull out a wedgie.

Another said: “Ehh we all do it. Also, I really like her bikini.”

This woman isn’t the only one snapped in an awkward act on a beach.

Through Google Maps, one Reddit user discovered a street view image of a couple by a beach in Phuket, Thailand which amused users.

The image shows a man and a woman near the beach, surrounded by trees, sand and greenery.

The couple are both seen wearing black tops and shorts and it appears they have just emerged from the sea and are preparing to leave the beach.

The Street View camera captures the man using a hose to wash off the sand and debris from the beach – however it’s where he placed the hose which got users talking.

The man placed the instrument inside the woman’s trousers, in a bid to wash the sand off of her buttocks as she stood there patiently.

While we don’t know the full backstory behind the image, it does appear that he was merely assisting the woman in washing off sand from her rear when the Street View camera captured him in action.