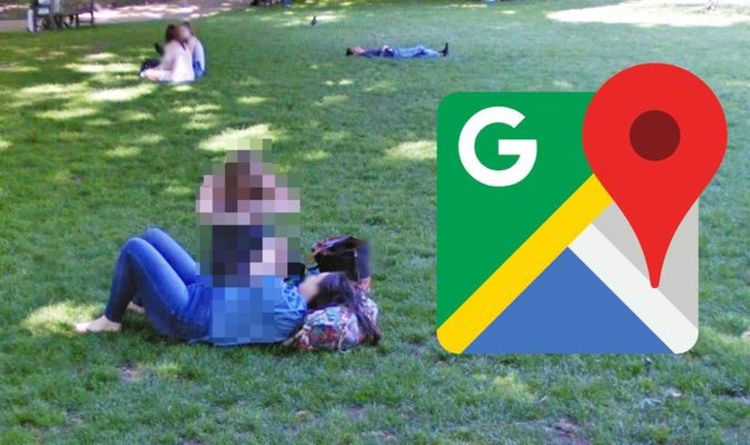 Since launching in 2007, Google Maps Street View has become a useful tool for millions of users looking to locate destinations from the comfort of their own device.

However, the tool isn’t used purely for geographical purposes, and has unleashed a world of mystery and oddities ranging from the weird to the wonderful and downright embarrassing.

Through Google Maps, one user discovered two women in a park in London – but what they were doing has amused Reddit users.

One woman is seen laying down in a blue top and jeans with a phone in hand, while the other is seen in a striped top and revealing one particular clothing item.

The woman can be seen fiddling with her top and revealing her white bra as the woman laying next to her appears to be taking a photo of her.

A third commented: “If the woman ever identified herself, she’d be mortified to see this all over the internet! How embarrassing.”

This duo weren’t the only ones caught in an interesting predicament on the streets of London.

One bizarre sighting left Reddit users surprised as they saw an image captured by Google Street View of a man outside a pub in Ealing.

The scene unfolds in the west London neighbourhood, on a street filled with red brick buildings, with a pub situated opposite a tree-filled park as the sun shines overhead.

Nothing seems out of the ordinary – people can be seen seated outside the pub on a sunny day.

However, the man in question – who can be seen dressed in a green shirt, navy shorts with matching green socks – is in full view and showing off a particularly impressive move.

His hands are clasped firmly around a lamppost with his legs spread in the air as he precedes to do the splits right in front of the Google Street View camera.

The move was much to the amusement of another passerby, who could be seen in the image walking past the flexible stranger with what appears to be a slight smile on his face.

ByRoyal Family members travel around the world frequently as part of their duty representing the UK. Though this is often a lavish affair, very...
Read more
Travel

ByNo one knows what the future of travel will look like. Yet, with the coronavirus pandemic continuing to wreak havoc on societies around the...
Read more
Travel

Holidays are normally hotly anticipated by Britons eager to jet away to great new destinations. Travelling has been made increasingly difficult in 2020, though,...
Read more
Travel

ByLauren SlossInternational travel had been a major part of Paul Brinkman’s life for years. Mr. Brinkman, 47, his wife and their four children spent...
Read more
Travel

ByIn their announcement to Facebook, Benidorm Palace wrote: “Dear customers, we are very sorry to have to give this news, because every day more...
Read more
Travel

ByQuestion 5: What US state has the biggest land area? Question 6: Which state is Helena the capital of? Question 7: How many states begin with...
Read more