Government receives MAJOR boost to its plans to test 100,000 people per day for COVID-19

Last week the Health Secretary Matt Hancock appealed to businesses and universities to help the government hit its 100,00-a-day testing target. Without a programme of mass testing, the government will not be able to release the country from the present lockdown any time soon. As professor Paul Hunter, infectious disease expert at the University of East Anglia, explained: ‘If we are able to roll out a good quality antibody test and find that a substantial proportion of the population is immune, then we will also be able to relax the current restrictions knowing that the infection would not spread as rapidly.” 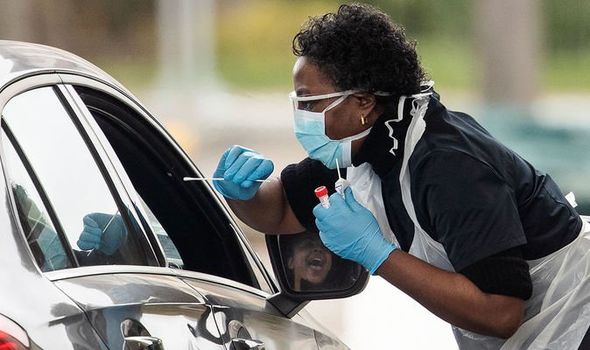 Government receives MAJOR boost to its plans to test 100,000 people per day for COVID-19 (Image: GETTY)

Currently the UK has tested no more than 14,000 on any single day, whereas Germany manages to test over 70,000 per day.

The government had hoped to ramp up its testing, after placing purchase options on up to 17.5 million antibody test kits with various companies.

In a serious blow to those plans, officials admitted this week that none of the tests had proven reliable enough to use.

However, in what could prove to be a game changer, the pharmaceutical companies AstraZeneca UK and GlaxoSmithKlein announced this week that they would join forces with Cambridge University to develop testing facilities.

The team are confident of delivering an accurate antibody test in the coming weeks.

Tom Keith-Roach, of AstraZeneca UK, said: “We are working to deliver a validated test by the beginning of May that we could then scale up by the end of the month.”

The team is also working on antigen testing and hope to test 2,000 people by mid-April before scaling up rapidly to 30,000 by the beginning of the May.

Mr Keith-Roach added: “I see an extraordinary kind of pulling-together, of collective effort from all of the stakeholders involved in delivering these solutions on behalf of the Government and the NHS.”

JUST IN: Coronavirus cover-up: Government experts may have known extent of outbreak in JANUARY


The news comes, as Imperial College announced on Wednesday that it had come up with a lab-free COVID-19 test which delivers results in just over an hour.

The government has already secured 10,000 of the DnaNudge “Lab-in-Cartridge” test” with an option to buy more if the test proves to be accurate and reliable.

Meanwhile, pharmaceutical companies are locked in a race against time to produce the first COVID-19 vaccine.

It is estimated that some 78 vaccines are in development, with four already having started clinical trials.

Scientists at the University of Pittsburgh in the US have high hopes for their peer-reviewed antidote and are hoping to start testing the vaccine on humans within the coming months.

The Pittsburgh team have tested the vaccine on mice and are confident that it will be able to provide immunity for at least a year.

An industrial-style production process has been used to produce the Pittsburgh Coronavirus Vaccine (PittCoVacc), meaning that once the go ahead is given, the team will be able to scale up production to deliver tens of thousands of doses per day.

The researchers are in the process of applying for approval from the US Food and Drug Administration and hope to receive the green light to start testing in the coming months.

Normally the trials take anywhere between a year and 18 months, before a vaccine becomes publicly available.

However, scientists on the team hope that because of the emergency situation, officials will allow the testing process to be sped up.

The University was able to quickly develop its vaccine, as a result of its previous experience of working on other coronavirus related epidemics.

Professor Andrea Gambotto explained: “We had previous experience on SARS-CoV in 2003 and MERS-CoV in 2014.

“These two viruses, which are closely related to SARS-CoV-2, teach us that a particular protein, called a spike protein, is important for inducing immunity against the virus.”