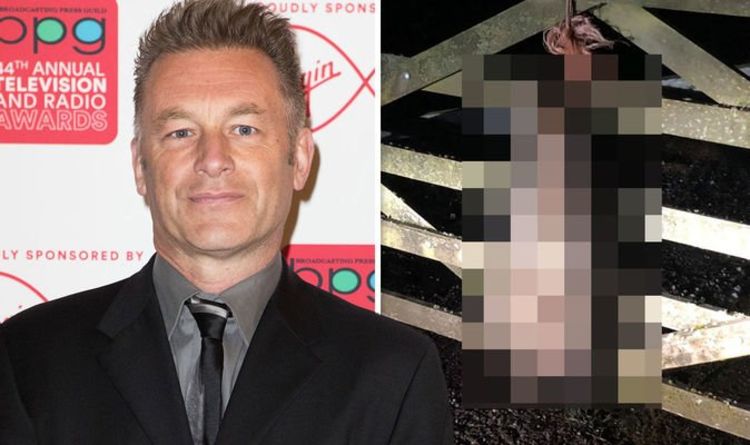 Chris Packham, 58, shocked his 388,000 Twitter followers when he shared images of a badger that seemed to have been killed and tied to his gate outside his home. The former Really Wild Show presenter previously dealt with a similar situation in December, when he revealed the body of a fox had been “dumped at his house” after expressing his views against fox hunting.

The presenter captioned the tweet in view of his 388,000 followers: “Always nice to get home after a long day at work to a warm welcome at the gate.

“I’d be grateful if you have an issue with me and my views if you could express it without killing innocent animals.”

Chris was confronted with the dead animal after airing his views against the badger cull.

He refused to take part in any BBC programmes or discussions on badgers since first speaking out on the cull in 2013. In a statement at the time he said: “My views on the Badger cull are well known and have been widely voiced and published.

“Nor will I be presenting any items in the series about the badger cull because, as natural history programmes, they are not the right place for discussions about matters of national public policy. I will however continue to make my views known when I feel it is appropriate to do so.”

He concluded: “Autumnwatch 2013 will include a film exploring the long history and science of human-badger interaction. Whilst the series will not cover the badger cull specifically, it will provide comprehensive information on this topic via the Autumnwatch website, which will also have links to news articles and other resources. Viewers will also be given the opportunity to have their say on the Autumnwatch blog.”

Chris previously tweeted just before the badger cull took place in August 2013: “That brutalist thugs, liars and frauds will destroy our wildlife and dishonour our nations reputation as conservationists and animal lovers.”

He also sent other tweets on the same day protesting against the cull, adding: “We can forget about ‘a nation of animal lovers’. Eco-genocidal and vengeful. We will be shamed globally as ignorant and savage.”

Fans took to the comments section of Chris’ post to share their thoughts on the shocking incident today.

One person wrote: “Since this is not the first time, and it seems to be escalating, I hope you are doing something to stay safe. You need cameras.”

Another added: “I’m so sorry people are doing this to you Xx.”

A third Twitter user added: “Omg Chris that’s awful, and so so sad and cruel. I hope you’re ok (well, as ok as you can be), and calling the police.”(sic)

Chris is a passionate animal conservationist and Gemma, who is an advocate of animal welfare and shares two dogs with her boyfriend Gorka Marquez, replied to his post to share her thoughts on the incident.