Greece on brink as first cases of coronavirus found among... 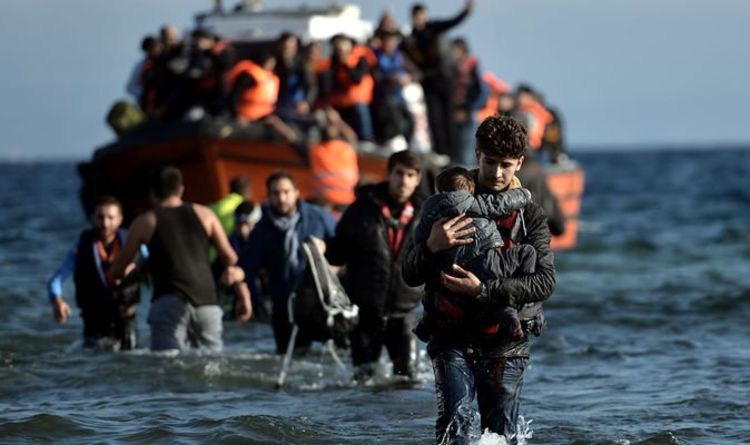 Humanitarian groups are calling for the likes of the EU, World Health Organisation (WHO) and the United Nations (UN) to help as the threat of coronavirus to the 100,000 refugees currently residing throughout the whole country erupted last week. The first cases of the virus were found in Malakasa and Ritsona camps, which have now been placed into lockdown following the emergence of the infection. The authorities said on Thursday last week the Ritsona camp was forced into shutdown after 20 people tested positive for COVID-19.

One of the places of biggest concern for aid organisations is on the Aegean islands, where there are around 50,000 refugees crammed into tiny unsafe conditions fit to home only 6,000.

Remarkably, there are still no cases of the killer virus within those camps – the latest updates say, but panic continues to grow surrounding the state of the facilities.

Marcus Skinner, Senior Policy Adviser for the International Rescue Committee, told Express.co.uk that groups had to act now to support the vulnerable in these camps because the virus “will come back” if they are not aided properly.

He said: “International communities must step up. There isn’t an alternative.

“This disease or any pandemic disease, you can’t contain it. If you ignore these vulnerable contexts, the disease will come back.

“So it’s in our own interests to do it from a national wellbeing and security perspective, but more importantly, apart from the fact that these are highly vulnerable people who require assistance at the best of times, we provide humanitarian assistance to Greece, Syria and elsewhere, and this is the double challenge we’re facing right now.

“This is a crisis being laid on top of a number of crises so it’s critical that the international communities step up.”

Earlier this week, Germany and Luxembourg were among a number of EU states looking to transfer children from these camps and into their own countries.

JUST IN: Greece crisis: Islands in RUINS as ‘nightmare within nightmare’ erupts

Greece was positive with the response as, according to New Europe, the country’s alternate migration and asylum minister Giorgos Koumoutsakos said the move was “being achieved despite the difficult circumstances of the pandemic and has created a positive example to other European partners”.

It is all part of a scheme created and adopted by the EU last month which will see Germany, Luxembourg, Croatia, Finland, France, Ireland, Lithuania, and Portugal take the youngsters from the Greek islands to help ease the devastation caused by overcrowding in the refugee camps.

And despite this gesture to aid Greece, which has become a hub for migrants moving from war torn countries after Turkey disobeyed an EU pact over migration control, Mr Skinner is still adamant that the issue could still become a major crisis.