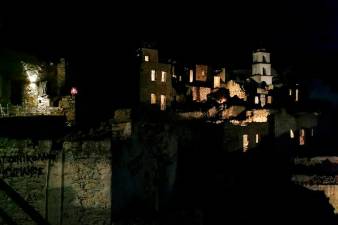 THE moonlight is the only light in the alleys of Mikro Chorio, the ancient capital of the Greek island of Tilos. And as in many other abandoned villages in Greece, they only come back to life for the tourists.

When night falls, Mikro Chorio (Little Village in Greek) rewakens, as a handful of visitors sip cocktails at the small bar-museum at the foot of the ruins.

“We are trying to bring it back to life,“ said the bar’s owner Giorgos Aliferis.

For years now, between 11:00 pm and midnight, he has been going in his little van to pick up customers from Livadia, the island’s port, where all the villagers were relocated after World War II.

“There was no water, no electricity, so people left looking for more comfort,“ Aliferis’s partner Vania Yordanova said as she served drinks on the bar’s terrace.

She first had to rush to get the power generator working for the bar after a bumpy 30-minute drive to Mikro Chorio.

Then, the deserted island village suddenly lit up like a film set, melancholic Greek music echoing in the starry night.

In the 1930s, the capital of Tilos– one of the Dodecanese islands in the southeastern Aegean Sea – still had 1,200 inhabitants, including three priests.

But gradually the population headed to the port, where business was thriving after 1947 when the Dodecanese islands were annexed by Greece from Italy.

By the 1960s the school that had once served 180 pupils was also transferred to the port and Mikro Chorio’s three cafes closed.

Aliferis, who hails from the Peloponnese in western Greece, discovered the abandoned village of Mikro Chorio in the 1980s, after he arrived on the island when his brother, a doctor, went to work there.

“I thought it was really sad that this village was deserted, and I had this crazy dream of bringing it back to life,“ he said.

He keeps the bar open three to four months every year, welcoming a variety of customers.

“Visitors come from everywhere – even from abroad – and the descendants of families who used to live in the village return and they are really moved,“ Aliferis said.

But the project, he said, has “cost me a lot, financially and psychologically” – further complicated by the coronavirus pandemic, which has lost him as much as 80 percent of his revenue.

Nor is he happy about the asphalt road that is due to be built to the village, which he fears will “change the landscape and the atmosphere”.

Mikro Chorio is far from being the only Greek village deserted by its inhabitants who migrated to towns and cities in the search for jobs.

And through a variety of initiatives, both public and private, some local people are trying to breathe back life into some of those abandoned places.

Vathia, a village on the Mani Peninsula in the southern Peloponnese, boasts spectacular views of the sea.

But its derelict stone castles and the scattered possessions of its former inhabitants, give it a forlorn atmosphere.

Some tourists visit for the 18th-century square towers still dominating the village that, while still thriving in the 19th century, was abandoned because of urban migration.

A government-backed restoration project in the 1980s was in turn also scrapped, so the guesthouses remained without visitors in the wind-battered village.

Not far from there, the fortified town of Mystras, a UNESCO World Heritage Site since 1989, has become a major attraction, one of the 10 most-visited sites in Greece.

Tourists flock to its paved alleys, admiring the elaborate frescos of the Byzantine churches and visiting the town’s monastery, which is still occupied, even if the town itself was deserted in 1950.

Spinalonga, a small abandoned island off Crete, still attracts tourists captivated by its dramatic past.

There, in the Venetian fortress that has become an archaeological site, patients suffering from leprosy stayed there until the early 20th century.

Spinalonga is also known as the setting for Victoria Hislop’s 2006 bestseller The Island, a historical novel that was also adapted into a popular Greek television series.

Other abandoned villages in Greece also come to life to cater for tourists that are looking for unusual destinations, like the 14th century Perithia on Corfu.

Taverns in Perithia open only in the summer for the visitors, who are enchanted by the Venetian style buildings in varying states of dereliction and the prospect of hiking to the summit of Mount Pantokrator.- AFP