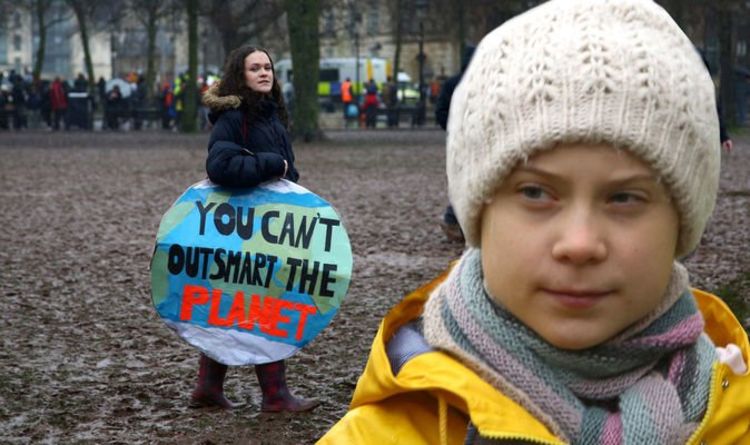 The strike was organised by Bristol Youth Strike 4 Climate (BYS4C) and attracted at least 15,000 people, who gathered on College Green in the rain and wind to hear the young Swedish environmentalist deliver her speech. Ms Thunberg once again laid into world leaders and politicians for not doing enough to tackle climate change. She accused them of “sweeping their mess under the rug” and vowed never to be silenced while “the world is on fire”.

The young Swede told an ecstatic audience, who chanted “Greta, Greta”: “Our leaders behave like children so it falls to us to be the adults in the room. They are failing us but we will not back down.

“It should not be this way but we have to tell the uncomfortable truth. They sweep their mess under the rug and ask children to clean up for them.

“This emergency is being completely ignored by the politicians, the media and those in power.

“Basically, nothing is being done to halt this crisis despite all the beautiful words and promises from our elected officials.

“So what did you do during this crucial time? I will not be silenced when the world is on fire.”

However, when BBC Bristol later posted pictures of a brown, muddy trampled College Green lawn after the crowds had dispersed, furious locals took to Twitter to accuse Ms Thunberg of hypocrisy and having scant regard for the environment.

One wrote: “College Green is (sorry I should say was) a popular place, it has been totally trashed, but do not put all the blame on the rain.

“It will cost thousands to lay more grass and make it beautiful again.

JUST IN: Organisers insist they are fully prepared for Greta rally

“Stop trying to publish Climate Change Protestors as hypocrites when you yourselves do nothing to promote more about the climate crisis.”

Another commented: “To be fair, it had barely recovered from when Corbyn was there. Grass grows, so is it really a problem?”

While a third said: “Look at the state of the palace green outside of Durham cathedral after people gathered to watch some projections!

“This happens in the summer also for other uni events! Grass grows!”

A crowdfunding campaign has been launched to raise money to replant grass on the College Green by Jon Usher from the charity Sustrans.