Growing with his art 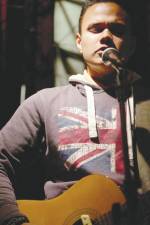 AT 24 years of age, Rauf Yusuf is a man of many talents, mostly skewing towards music. Despite this, Rauf says that his father is the real musician in his family, as he was a drummer in a band during his youth. Rauf grew up listening to his father’s extensive collection of music.

“The musician part of me comes out during the weekends, singing and playing the guitar at local malls, train stations and city street corners,” he said, as weekdays are spent at his full-time day job in logistics.

The young musician is also an ardent outdoor sports enthusiast, and shares his talents through his eponymous YouTube channel and on Instagram (@jaibbx).

You’re a singer, songwriter, musician and beatboxer. How did each of these begin for you?

“My first experience singing in front of an audience was when I was 12 years old. I sang Suci dalam Debu by Iklim in front of my classmates. That song was played so often at home that I had memorised the lyrics, and singing felt so easy to me.

“A few years into doing my diploma in TESL at Kolej Universiti Poly-Tech MARA, I decided to not let my passion die out, so I joined Vocalism, the college’s music club. After a successful audition, I joined the choir team as a tenor and we performed at various different events held by the college.

“Another stepping stone in the growth of my passion was when I joined a band called The Five Live, where we performed at open mic [sessions] at Jalan Dalam and LiveLokasi.

“As for beatboxing, it started when 13-year-old me was left in awe after witnessing my cousin demonstrating a few cool beats using only his mouth. Soon after that, I taught myself how to beatbox through binge watching beatbox tutorials on Youtube, joining beatbox competitions and performing at a number of events.

“Although it has been 10 years since I started beatboxing, it never ceases to amaze me that the human mouth is able to produce such sounds.

After graduating, I decided to let my passion become my profession. So here I am, singing my heart out to local passersby on the weekends.

“I am aware that to some, it may not seem like the most proper profession, as we are earning from people’s generosity but to me, it is the best medicine for my soul as my heart is content with what I do.”

Do you have a particular genre that you’re more inclined towards writing/performing?

“Honestly, I never had a preference for genres when writing my songs. All I know is that I write some lines, strum and pluck through numerous chords to find a progression that fits the lines accordingly.

“Then, those two are arranged in a way that complements each other, and that’s pretty much it. I do receive comments saying that my music often sounds country-like, sometimes pop, the opinions vary at times.

“For the moment, I am still on a journey to discover my true genre of music.”

Do you have plans to release your own original songs any time soon?

“Yes, I am currently working on getting my first single out, and it is one of the few pieces that I am proud to have made. It will be available on all music streaming platforms, and I am very much looking forward to it. I’ll leave updates on my social media as to when exactly it will be released, so stay tuned!”

How has the pandemic impacted you?

“Everything has two sides to it, including this pandemic that we are going through. The downside of it is that I’m not able to be out and about, sharing my passion with the public, and not earning through busking. I am more of an outdoors person myself, and being stuck at home all the time really took some getting used to.

“But on the bright side, I have so much time to catch up on what I’ve been missing. Being fatigued from work has always kept me from practicing those new songs that I have always wanted to. So right now, I’ve been keeping myself occupied with practice and lessons.

“I also experienced my first ever livestream open mic performance, which was quite an eye opener since social distancing began.”