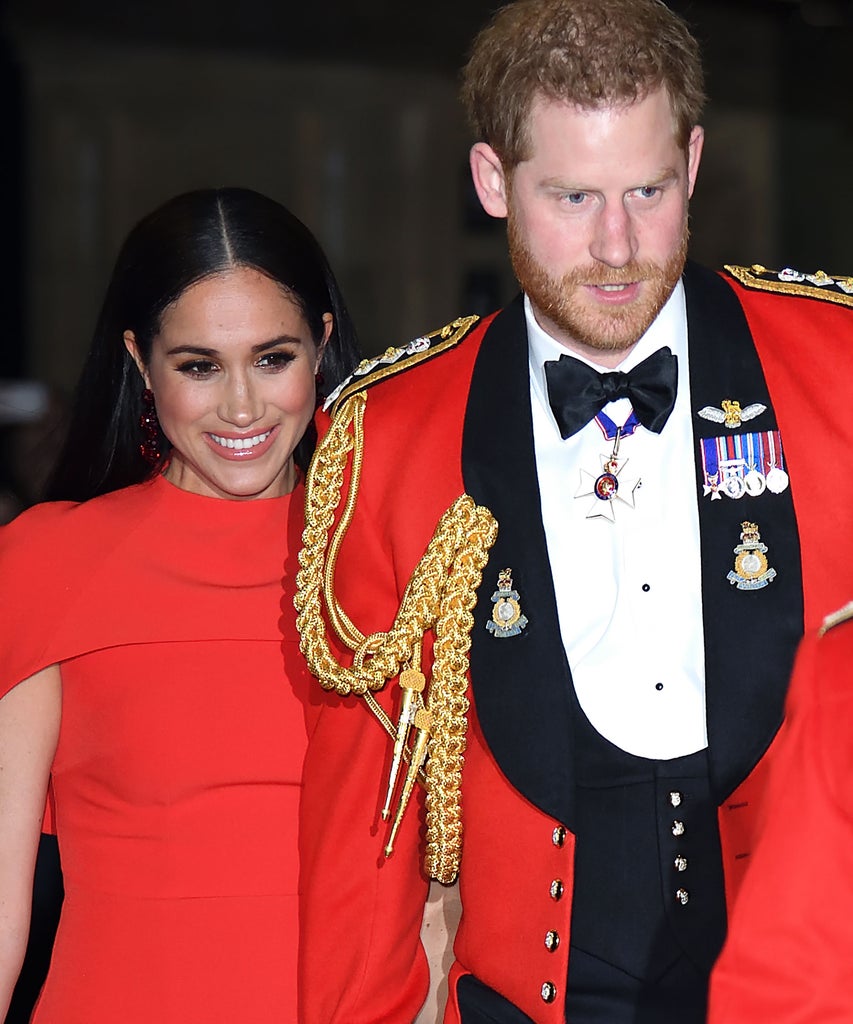 Just weeks ahead of
their official transition out of the royal family,
Prince Harry and Meghan Markle are finding creative ways to say
goodbye to their former roles. As Harry
prepares to step away from his British military appointments
for at least the rest of this year, he opted to wear his red
military uniform to Saturday night’s Mountbatten Festival of
Music, an annual fundraiser for the Royal Marines Association.
Meghan donned a matching floor-length, caped Safiyaa gown with red
Aquazzura heels, earrings, and a satin clutch.

The red uniform has a long history within the British military,
dating back to around the 17th century. The bright color distinguished
British soldiers from enemies, especially when they were at war
with French soldiers in blue. Harry has worn the military uniform
before, which represents his rank as Captain General of the Royal
Marines,
notably at Prince William’s wedding — but, as Vanity Fair
reported, he has typically opted for the more subdued black
version.

Though Harry and Meghan have spent the past few months in
Canada, they have clearly
returned to the U.K. with a bright, bold bang. But they
weren’t the only ones in red: other veterans wore matching
uniforms. Meghan, though, made a statement of support by matching
her to dress to Harry’s ensemble.

On April 1, Harry and Meghan will begin their new roles outside
the Palace. Though Harry will still be able to partake in certain
military and veteran events and traditions, his step back from
certain royal duties will bar him from
wearing the uniform at official engagements. He will still be
allowed to wear the medals he received for his time in Afghanistan,
but it might be awhile before we see Harry in military red
again.

Tonight, The Duke and Duchess of Sussex attended the annual
Mountbatten Festival of Music at the Royal Albert Hall — marking
the 75th anniversary of the end of the Second World War and the
80th anniversary of the formation of Britain’s Commandos. The
Duke, who is Captain General @RoyalMarines joined veterans, serving
members, world-class musicians, composers and conductors of the
Massed Bands of Her Majesty’s Royal Marines to help raise funds
on behalf of the @RoyalMarines Charity. #MFM2020 Photo © The Duke
and Duchess of Sussex / Chris Allerton

This year’s festival was special, as it coincided with both
the 75th anniversary of World War II’s conclusion and the 80th
anniversary of the British Commandos’ formation. And it makes
sense that Harry wanted to return for the occasion: his military
commitments have been important to him throughout his royal tenure.
Harry even addressed the community directly during
a January speech about his impending exit. “I was born into
this life, and it is a great honor to serve my country and the
Queen,” he said. “I will continue to be the same man who holds
his country dear and dedicates his life to supporting the causes,
charities, and military communities that are so important to
me.”

Harry and Meghan returned to England last week for Thursday
night’s Endeavor Fund Awards, where the couple also
color-coordinated in bright shades of blue. Up next, they are set
to reunite with the rest of the royal family for Commonwealth Day
on Monday — if the pattern sticks, they’re sure to rock another
bold color then, too.

Like what you see? How about some more R29 goodness,
right here?

Are Prince Harry & Meghan Markle Mad At The Queen?

By Vanessa Friedman Display Copy, the magazine that debuted online and on newsstands on Oct. 22, looks, in most ways, like a typical magazine. It has a...
Read more
Fashion

Costume Drama: The Highs and Lows of Superhero Uniforms

By George Gene Gustines Superheroes tend to be thought of as monolithic icons by much of the public, but comic book fans know they have evolved...
Read more
Fashion

By "We extend our environmental approach into everything we do. It's important that if we're going to talk the talk, we must walk the walk,"...
Read more
Fashion

By Valeriya Safronova “If someone asked you before, ‘Do you want to sign up for a world in which your co-workers see inside of your house...
Read more
Fashion

By Philip Galanes I am a recent college graduate. I came out to my mom as transgender once I got a job, moved in with great...
Read more