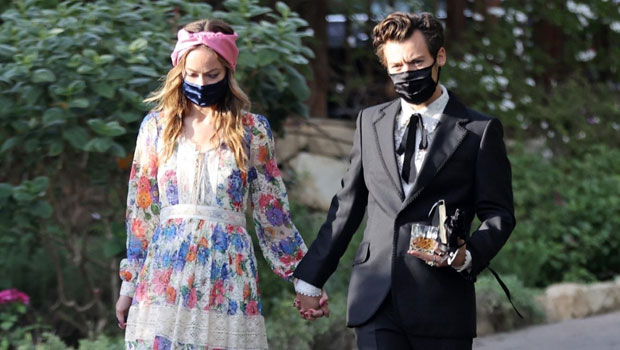 It was the photo that nearly broke the Internet: Harry Styles on a wedding date with his ‘Don’t Worry Darling’ director, Olivia Wilde. See it here again!

The new year has barely begun, and it has already kicked off with a viral moment: Harry Styles and Olivia Wilde‘s wedding date. The “Watermelon Sugar” singer, 26, and the Booksmart director, 36, sent Twitter into a frenzy after they were pictured holding hands at the nuptials for Harry’s agent (which the One Direction alum officiated himself) at the picturesque San Ysidro Ranch in Montecito, CA on Jan. 3. As you can see below, fans wondered if there was more to Harry and Olivia’s professional relationship after seeing how tightly they held onto one another’s hands.

Harry and Olivia even subtly coordinated wedding outfits: the lace dress shirt underneath Harry’s tuxedo complemented the lace trim on Olivia’s floral maxi dress, and both wore matching black face masks. Their hangout didn’t end there. The very next day, they headed to Harry’s home in Los Angeles, and were even photographed at the singer and actor’s front door.

Amid all the uproar Harry and Olivia’s hand-holding photo has caused, neither has spoken up about the status of their relationship — whether that be romantic or just professional. Olivia is directing a new movie Harry is starring in alongside Florence Pugh, Don’t Worry Darling, which began filming at the end of Oct. 2020. Production temporarily halted in November after a crew member tested positive for COVID-19, but Harry and Florence were seen on set again in Palm Springs (and in retro costumes) by the beginning of December.

Olivia was previously engaged to fellow actor Jason Sudeikis, 45, but their breakup was reported in Nov. 2020. They had been engaged for more than seven years, and share two children: their son Otis Alexander, 6, and daughter Daisy Josephine, 4. Olivia was seen reuniting with her ex-fiancé after holding hands with Harry; she dropped by his house, also located in Los Angeles, on Jan. 4. Meanwhile, Harry’s last relationship was with Victoria’s supermodel Camila Rowe, although he did spark romance rumors with Japanese-American model Kiko Mizuhara in 2019.