by Newslanes 1 week ago1 week ago
154views 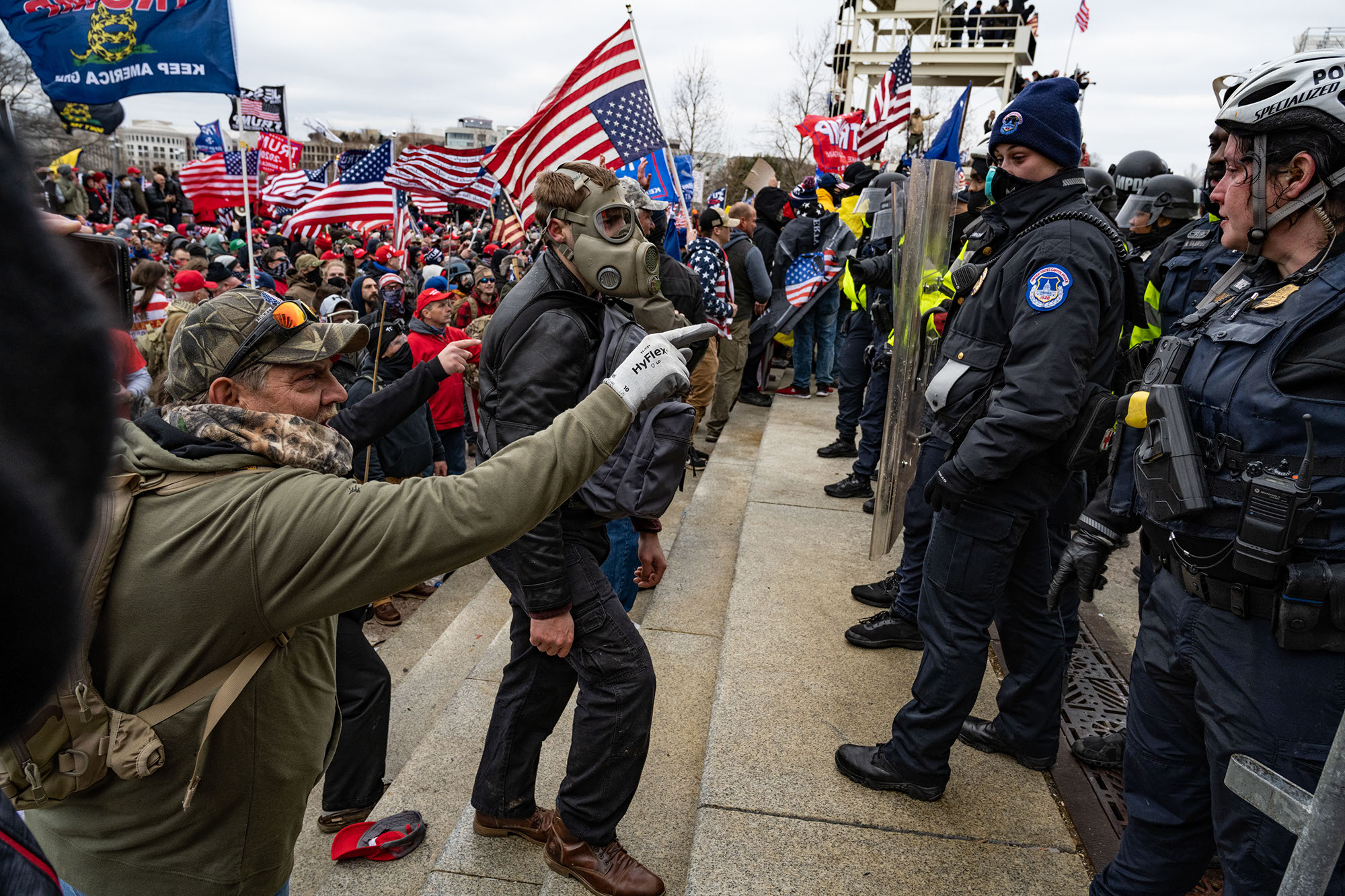 No one was safe from their anger.

White nationalist Proud Boys users on Telegram called the U.S. Capitol Police “f—ing coward[s]” while others livestreamed themselves running amok in the halls of Congress to their loyal online fanbases. Others were captured on video calling the police “traitors” and “pigs,” threatening their deaths. False rumors flew that the Chinese Communist Party had actually instigated the attack, or that antifa, the amorphous label for any leftist counterprotester, had disguised themselves in a false flag operation.

They even questioned the motives of ostensible Trump allies who still wanted to challenge last November’s election. “A lying traitor in two tweets,” tweeted American Priority vice president Tom Shadilay, posting screenshots from Sen. Ted Cruz’s account: a clip of him repeating claims of election fraud, and a statement condemning the violence at the Capitol 12 hours later.

The riots also made the woman who died during the rampage an instant martyr for the far-right cause, with her Facebook pages flooded with QAnon supporters praising her actions, calling her a “patriot” who had been killed by the cops. Conspiracy theories that accused the police of executing her in cold blood soon gained traction among fringe social networks, with multiple Telegram channels postponing bogus claims that were quickly circulated by others.

Soon, the extremist rhetoric crept from the fringe into the power centers of MAGA Nation.

Infowars and an affiliated website, Banned.video, repeatedly played footage of the woman bleeding to death in the Capitol Building for hours. At one point, per footage from the broadcast, podcast host Joe Rogan — long accused of being too permissive of far-right conspiracy theories — called into the show, encouraging them to keep playing the clip.

Members of Congress themselves soon joined in.

On the floor of Congress itself, Rep. Matt Gaetz (R-Fla.) cited an internet theory circulated by the Washington Times that claimed that a facial recognition firm’s software had identified some of the rioters as members of antifa. The company, XRVision, soon released a statement saying that they had not found antifa members inside Congress — instead, they correctly identified two neo-Nazis and a QAnon supporter.

And while Rep. Paul Gosar (R-Ariz.) used his Twitter handle to denounce the riot and called for rioters to stop, his post on Parler, the Trump-friendly social media platform, told a different story. “Americans are upset,” he said simply, posting a photo of Trump supporters scaling the walls of the Capitol.

It was a moment that shocked the mainstream conservative movement to its core, and prompted dozens of congressional allies and administration officials to finally abandon Trump.

But to extremism researchers, this was a moment years in the making — and one that, unfortunately, was completely predictable to anyone who had paid attention in the days leading up to Jan. 6.

Far-right groups have increasingly used fringe social media platforms and online message boards to coordinate their offline activities, with both the recent presidential election and ongoing Covid-19 pandemic used to galvanize support and try out new online tactics to bolster extremist views, according to multiple disinformation experts. And that haphazard infrastructure was enough to build out a chaotic, enormous, impulsive insurrection on Jan. 6 — not so much premeditated, as it was promised.

“In these online communities, there were very clear and repeated conversations about overwhelming police in Washington, with the force of large crowd numbers, in order to violate laws and enter federal buildings,” said Jared Holt, a visiting fellow at the Atlantic Council’s Digital Forensic Research Lab, who tracks right-wing extremism. “This was something that was repeatedly brought up as an idea. This was something that was generally supported in these extremist online communities. And as we saw [on Wednesday], that is exactly what they did.”

POLITICO spoke to nine researchers from monitoring groups and think tanks who have long tracked the growth of right-wing extremism. Overwhelmingly, they agreed that what had happened on Wednesday was the inevitable culmination of years of rhetoric among militias and far-right groups that had openly fantasized about overthrowing the government.

The messaging blended QAnon conspiracy theories with MAGA themes of government corruption and the need to bolster Trump’s cause. It included longstanding bugbears on the right like the Democratic Party cheating to regain power, as well as more extremist views promoting anti-Semitic tropes and accusations that George Soros was trying to undermine American democracy, according to a review of social media activity by POLITICO. And it validated the message at the core of the militia movement: that a small group of instigators could take extreme action, outside the boundaries of the law, in order to destroy the government.

“These groups now have enough propaganda material to fill out the rest of their calendar year,” said Ciarán O’Connor, a disinformation expert at the Institute for Strategic Dialogue, a London-based think tank that tracks online extremism.

The scattergun online anger took some high-profile right-wing influencers by surprise — and several either tried to urge MAGA supporters to not become violent or attempted to shift the focus onto liberal groups.

In recent months, these social media personalities have led the call over alleged voter fraud abuses in the presidential election, and have garnered millions of online followers by pushing a driven agenda that often promotes conspiracy theories and partisan attacks.

But in the aftermath of Wednesday’s violence, the likes of Charlie Kirk, a MAGA youth leader and Turning Point USA co-founder, told his almost 2 million Twitter followers that those at Capitol HIll “shouldn’t act like ANTIFA,” in reference to the loose, far-left anti-fascist movement.

Dan Bongino, a former Secret Service officer turned right-wing media personality, played up allegations on his podcast that liberal groups had carried out similar attacks over the summer during the Black Lives Matter protest, while Jack Posobiec, another pro-Trump influencer, posted videos purporting to show Capitol Hill rioters urging others not to be violent.

“There are always people who will want to exploit these narratives,” said Jonathan Bright, a senior research fellow at the Oxford Internet Institute who tracks online disinformation. “But many didn’t realize how it would turn out this way.”

Indeed, Kate Starbird, an associate professor at the University of Washington, called the riot “hashtags come to life” — a real-world manifestation of the infinite social media campaigns perpetrated by right-wing celebrities.

“I used to say a few years ago that all these social media profiles, they look like caricatures of the worst of political rhetoric and the vitriol they bring out,” she said in an interview. “And then to see that actually now manifesting in physical spaces — manifesting as not just protests but manifesting as an attempted insurrection, an attempted takeover of our Capitol building. It’s surreal and unsurprising at the same time.”

It could not have been clearer in the livestreams from Tim Gionet, a white nationalist influencer known as Baked Alaska known for his internet trolling, as he stormed the Capitol with a group of costumed rioters, gleefully broadcasting them rifling through desks and taking selfies. His followers posted their comments in real time: “WE’RE THE PRESIDENT NOW” and “SHOOT BLM AND ANTIFA ON SIGHT”.

While the power centers of the MAGA movement reacted in horror to the actions of the mob, their actions were no surprise to anyone who’d observed the rise of the militia movement, the anti-government and anti-law enforcement wing of American far-right extremism. It also highlighted that these fringe groups may start to break away from the more mainstream MAGA movement amid the whirlwind of online conspiracy theories that were urging these extremists on.

Notably, several researchers saw the ideology of the Three Percenters, one of the most active militia groups in the country, at the forefront of Wednesday’s insurrection. They, and other militia groups, focus their ire against any form of government, from the local level to the federal, and frequently express that by occupying government buildings — though never one as prominent as the U.S. Capitol.

“For the militia movement and much of the far right, there’s this idea that it only takes a small group of people to enact revolutionary change,” said Cassie Miller, a senior research analyst at the Southern Poverty Law Center, who focuses on white supremacy and white nationalism. The Three Percenters, specifically, believe that only three percent of the population of the United States fought in the American Revolution — a historically false claim, but one that Three Percenters and other militias embed in their iconography.

“They don’t necessarily need to build a mass political movement as long as they have a kind of revolutionary or radicalized vanguard that is leading the way,” Miller continued. “And then the rest of the country will eventually fall into place. They see themselves as the true patriots who are going to awaken everyone else.”

Angelo Carusone, president of the left-leaning watchdog group Media Matters, argued that right-wing rhetoric had provided cover for the right’s extremist wing, over their shared language of hyper-patriotism.

“When they talk about 1776, it’s not like, ‘Oh, we have to defend the Constitution’. A lot of what they’re harkening to is this idea that it just takes a couple of people to start a revolution,” he said. “In some ways, they proved that yesterday.”

Joan Donovan, the research director of the Harvard Shorenstein Center for Politics, Media, and Public Policy, noted other strains of conspiracies inflaming pro-Trump, anti-government sentiment, as she and her team monitored several Trump groups organizing caravans to Washington.

“There was a lot of cryptic posting from people about the QAnon talk about ‘The Storm is coming,’ and how to be ready,” Donovan said, referring to the conspiracy theory’s belief in a violent, apocalyptic event that would purge Washington of Satanic pedophile elites. “There was some talk about guns and what to bring, and what was legal and what was not.”