Heart attack: Noticing a symptom in your mouth could be a warning sign 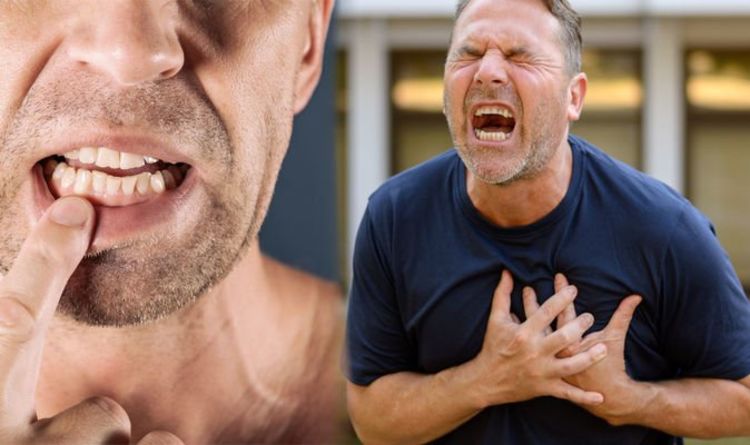 Heart attack occurs when a coronary artery becomes suddenly blocked, stopping the flow of blood to the heart muscle and causing damage. Heart diseases cause more than a quarter of all deaths in the UK. That is nearly 170,000 deaths each year with an average of 460 deaths each day or one every three minutes in the UK, according to the British Heart Foundation. Knowing the early signs and symptoms could be a matter of life or death for you or someone else.

Recently, dentists, researchers and doctors have begun to examine the link between oral health and overall health.

One area they’ve focused on is the relationship between gum disease and heart disease.

Gum disease, also called periodontal disease, is inflammation of the gums. It can lead to the breakdown of the gums, teeth and bone tissues that hold them in place. Heart disease refers to a broad set of conditions, including heart attack and stroke.

Heart disease is caused by the narrowing or blockage of important blood vessels.

Dr Michael Mosley said: “Pericarditis is inflammation of the pericardium – the fibrous bag that surrounds your heart.

“It can occur after a viral or bacterial infection, or following a heart attack. But often the cause is unknown.

“There is an emerging theory that the bacteria that cause gum disease may also play a role in a number of major health problems, including heart disease and Alzheimer’s.

“Some scientists sayit’s because this bacteria has also been found in brain and heart tissue samples of people who have died of these illnesses.

“We don’t know for sure if that bacteria has caused illness in these people but there is a theory they cause inflammation and this ultimately compromises the function of these vital organs.”

In a study with the American Journal of Preventative Medicine, the association between gum disease and heart disease was analysed.

Researchers looked at people who had both gum disease and heart disease.

They discovered people who had received adequate care for their gum disease had cardiovascular care costs that were 10 to 40 percent lower than people who didn’t get proper oral care.

Given this evidence, the American Dental Association and American Heart Association have acknowledged the relationship between gum disease and heart disease.

Gum disease may increase the risk of heart disease because inflammation in the gums and bacteria may eventually lead to narrowing of important arteries.

“We can’t say for sure that gum disease leads to heart problems or dementia. It could be vice-versa.

“All we know at the moment is that the bacteria does seem to coexist in the teeth and other organs.

“Irrespective of any link, it is a good idea to keep your teeth healthy,” added Dr Mosley. Regular visits to your dentist can help with early diagnosis and treatment of gum disease.

You should also let your dentist know if you have any symptoms of gum disease, including persistent bad breath, swollen gums, pain when chewing, highly sensitive teeth, receding gums or lose teeth.

If your doctor suspects heart disease, they will make a diagnosis based on your medical history, the severity and duration of your symptoms, and the results of a physical examination.