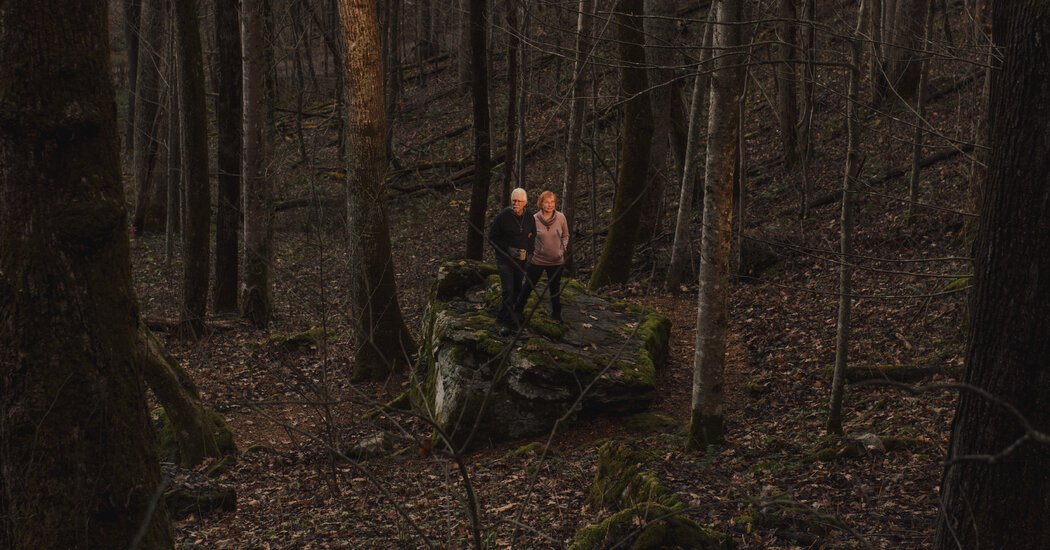 Since the beginning of the pandemic, Paul Fredette and Karen Karper Fredette have made some changes to their lives: Ms. Fredette stopped attending her local exercise class, and the couple whittled their interactions with their neighbors down to waves.

But in many ways, seclusion comes naturally to them. From a house they call Still Wood, nestled in the slope of a mountain surrounded by hundreds of acres of wild woodlands, the Fredettes live their lives “oriented towards solitude,” which is their preferred way of saying that they’re hermits: devoted to simplicity, silence and prayer. The nearest town, Hot Springs, N.C., is 18 miles away and has a population just under 600.

Mr. Fredette, 71, is a former Catholic priest, while Ms. Fredette, 78, spent 30 years in a monastery after high school before leaving to live as a hermit in a cabin in West Virginia. Since 1996, the couple has overseen a social network for hermits and the hermit-curious called Raven’s Bread Ministries. They provide spiritual counseling to seekers of solitude, write books on the topic, run a website and deliver a quarterly newsletter, Raven’s Bread, which includes contributions from the greater hermit community.

The original idea for Raven’s Bread Ministries was to validate hermits’ attraction to solitude. But this summer the Fredettes felt called to minister to a different demographic: those struggling with the isolation of the coronavirus pandemic. After noticing their average daily website hits went from around 800 pre-pandemic to up to 2,000 in August, the Fredettes began creating YouTube videos. Listening to them feels a bit like getting a very quiet pep talk from your grandparents, or watching an unusually spiritual A.S.M.R. video.

“A lot of people are going to be in pain, and if you know there’s something you can do to alleviate some of that pain, do it,” Ms. Fredette said.

In addition to “affirming and supporting” hermits, the Fredettes serve as unofficial spokespeople on their behalf, dispelling the Unabomber stereotype that looms large in the public imagination. Like everything these days, hermits exist on a wide spectrum and prefer a variety of identifiers: lovers of solitude, solitaries, contemplatives. (Ms. Fredette likes to add “contemporary” as a qualifier, to make the lifestyle sound less antiquated.)

Although some version of the solitary exists in nearly every religious tradition, eremitism is most commonly associated with the early Christian Desert Fathers and Mothers of the third and fourth centuries. Academics have found interest in eremitical life to be tied to the strength of centralized ecclesiastical institutions at the time, as well as increasing industrialization and urbanization.

Today, there are hermits who have been officially professed by their respective religious institutions — in Catholicism they are called “canonical hermits” — and rogue hermits who answer to no spiritual authority. There are hermits who live in caves, like the Himalayan Hermit, who spends his summers in a mountain crevice 10,000 feet above Gangotri, India. But many more hide in plain sight, in suburbs and cities.

The Real Life of a Hermit

Hermits have never been quite as isolated as many assume: They have often attracted devotees and have always had to earn their own living, which means allowing for some contact with the outside world.

Contemporary hermits might take jobs that require little human interaction, like cleaning houses. They try to fill what extra time they have with spiritual practice, rather than social interaction, in person or online, and make choices that support that end: They’ll meditate on their commute rather than read the news, or only answer their phone during designated hours.

They can live anywhere, but tend to reside in modest dwellings and avoid moving around unnecessarily. Nevertheless, a hermit should also not be confused with a recluse. The difference, Ms. Fredette said, is that hermits do not exit society because of misanthropy. “I would define a hermit or a person who chooses solitude as one who chooses solitude for spiritual reasons,” Ms. Fredette said, “and we do accent the spiritual, but it can be any form of spiritual.”

Despite the hermit’s religious origin, a surprising number of subscribers to Raven’s Bread describe themselves as “formerly” religious and say they don’t affiliate with a particular church or faith group.

The topics of the Fredettes’s videos are wide-ranging: Sometimes the couple encourages viewers to journal their worries, sometimes they mirror back feelings of despair and anger, and sometimes they relay comparable experiences from their own lives, such as when Ms. Fredette had to miss family gatherings while cloistered at the monastery.

They lead mini-guided meditations and quote solitary luminaries like Thomas Merton and Julian of Norwich, a medieval mystic who lived through the Black Death and civil unrest. The Fredettes also touch upon the events of our day, like racial injustice and climate change. “We’re not separated from what’s going on around us,” Ms. Fredette said.

Can Anyone Embrace Solitude?

Hermits themselves are torn on the issue.

“Solitude is not like protein,” said Heidi Haverkamp, a Raven’s Bread subscriber and the author of “Holy Solitude: Lenten Reflections With Saints, Hermits, Prophets, and Rebels,” who describes herself as a part-time solitary. “Some people find what I get from solitude in music or in exercise, just different ways that they access the transcendent.”

Several people pointed out that solitude for them is more a tool than simply a comfortable loneliness. “Solitude is a means,” said John Backman, a writer and “quasi-hermit” who affiliates with both Zen Buddhism and Christianity. “It is a means to draw closer to, immerse oneself in, that or who which is larger than we are, to immerse ourselves in Spirit, as it were.”

But the Fredettes and other hermits believe that anyone could benefit from incorporating some eremitic fundamentals — such as being rooted in place, practicing austerity and committing to a daily schedule that prioritizes prayer or meditation — to help them make sense of their isolation into their lives, regardless of personality type, religiosity, or life circumstances.

For people with little to no background in hermit spirituality, the pandemic has proved the ideal entryway. Karthik Kotturu, 27, of Gurugram, India, who described himself as spiritual but not religious, said that after an initial rocky adjustment to lockdown life, he found solace in the teachings of Zen Buddhism.

“The pandemic made me realize how afraid I was of being alone,” he wrote in an email. Discovering the Zen idea of detaching from the world — in the words of the Tao, eliminating both “longing and aversion” — helped him to shift his perspective. “Once I started seeing what I already had, my desires to seek something from outside started decreasing.”

Others have found that the situation has allowed them to tap into a love of solitude that was always present but neglected because of life obligations. Hannah Sheldon-Dean, 32, a writer and editor living in Brooklyn, said her morning chores have become a slow, calming routine, and she always ends her days by listening “Harry Potter and the Sacred Text,” a podcast in which the hosts do a deep read of the Rowling series, sometimes utilizing Lectio Divina principles, a Christian style of reading which involves approaching a text in four unhurried stages: read, meditate, pray, contemplate.

“I’ve always had ritualistic and contemplative tendencies like the ones the hermits describe, but the pandemic has just given them more space to flourish,” Ms. Sheldon-Dean said.

Some contemporary hermits say prayer and meditation can be done while simultaneously engaging in other activities. And all the hermits interviewed described experiencing a psychological dredging process in the early days of their solitude (they described the emotions that came up as “junk” or “sludge”) and emerging as evangelists for self-love.

“When we’re alone, all the fears and worries and anxieties come up, because we can’t distract ourselves,” said Sister Elizabeth Wagner, a canonical hermit who lives in her own “cell” on the grounds of a communal hermitage in Central Maine. “The great way to be with ourselves, to embrace who we are, warts, bumps, lumps and all, is to breathe.”

Ms. Fredette said that the understanding that your own “deeper self” is always beside you is the key to transforming anxiety-ridden isolation into nurturing solitude. “Once you begin to talk to yourself, know yourself, then you realize you’re not alone.”

The most potent grounding force of all, many hermits said, is nature. Hermitic life and environmentalism are natural bedfellows: Hermits generally travel infrequently — the term “anchorite” refers specifically to a religious solitary who takes a vow to remain in one place, though even non-anchorite hermits tend to be homebodies — and eschew rabid consumerism.

Awe in the face of the natural world runs like a thread through the history of eremitism, from the pastoral poems of the Yuan dynasty hermit Stonehouse right up to the work of the Charles Brandt, the Vancouver Island priest-hermit who fought tirelessly for the preservation of the streams and forests around the cabin he called Merton House.

Today, some hermits just walk around in a patch of grass, something Sister Rachel Denton, a canonical hermit in Sheffield, England, called “prayer walking.” She also picks up litter in the public park across the street from her home, a community service she calls her “penance.”

“I suppose there’s a therapy in there as well,” said Sister Denton. “Your body doing the walking, doing the pacing, it’s like a mantra.”

Alternatively, some hermits make friends with nature, like the Fredettes have.

“We have a rock, a huge rock, that’s sticking out of the mountains,” Ms. Fredette said. “Her name is Petra. And we have a path that leads right out to Petra. And when things are difficult I go out and I lean on Petra, and I say, ‘Give me some guidance.’”