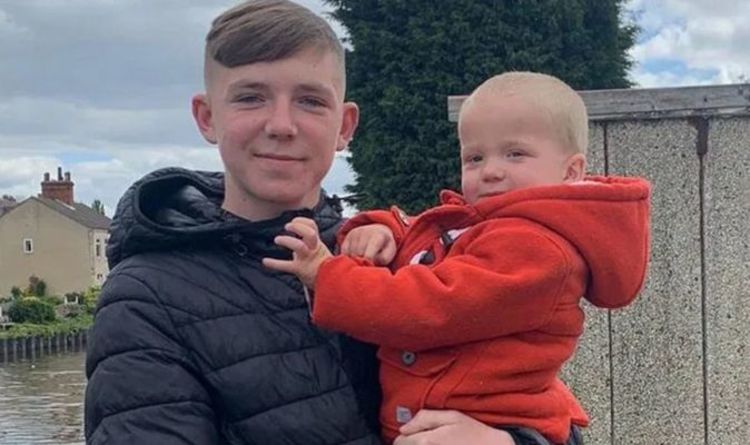 Ryley Ferguson, 15, spotted 15-month-old Reggie Hampton in the water while out walking his dogs in Knottingley, west Yorkshire. The little toddler had apparently strayed from his garden before falling into the river. Taking to Facebook, Reggie’s mother Becca praised the young hero and labelled him as a “guardian angel” for saving her son.

She said: “Our hero right there with my boy, this photo will be getting printed and put into a frame and put where Reggie can see it so he knows who his guardian angel is.

“Reggie will always know who his hero is and we will forever be in your debt.”

Recounting the moment, Reggie spoke of how he saw the toddler fall into the river before running in to save him.

He said: “I could hear this little kid shouting and waving.

“I realised how young he was and with him being on the other side I thought I need to go and get him or he’s going to go in.

“I could see him playing in the grass.

“A few seconds later, he did and I saw his legs sinking, I threw my coat off and jumped in after him.

“When I got to him he was basically at the bottom of the canal.

“I was telling him ‘I have got you, you are going to be alright’.”

Ryley’s mother and father have since praised their son for his incredible bravery.

Both boasted how proud they were of their “brilliant” son for saving the toddler.

His mother, Amy, said: “It’s all overwhelming, obviously we are really proud of him.

“He must have had somebody watching over him.”

Local councillor, Tom Gordon even called on the Mayor of Wakefield Council to ensure Ryley receives some recognition for his act.