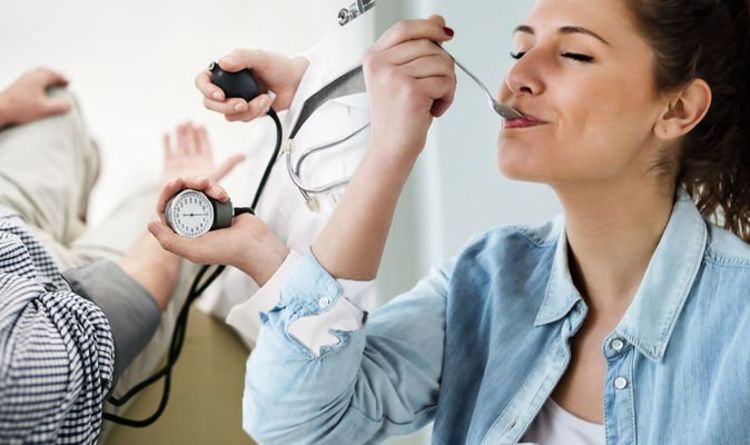 It’s estimated that around 5.5 million people in England are affected with high blood pressure, according to GOV.UK.

A normal reading for blood pressure should read 90/60mmHg and 120/80mmHg. For those with higher readings, extra vigilance is needed when it comes to the choices of food one makes.

Yoghurt is a great option for helping to lower blood pressure as its packed with nutrients, including some that build strong bones.

Yoghurt also contains some friendly bacteria that may be good for the digestion, too.

Research is starting to show that may be just the beginning of what it can do for your health.

In a study published in the American Journal of Hypertension, the benefits of yoghurt on women’s blood pressure was analysed.

The researchers found that women who consumed five or more servings of yoghurt a week had a lower risk of developing high blood pressure than similar women who hardly ever ate a yoghurt.

According to the American Heart Association (AHA), having high blood pressure is potentially dangerous because it strains the heart, hardens arteries and raises the risk of brain haemorrhage and kidney problems.

Previous studies have already shown that dairy products can reduce the risk of high blood pressure in at-risk adults, say the researchers, but few long-term studies have looked at the independent effect of yoghurt alone.

Lead author of the study, Dr Justin Buendia at Boston University School of Medicine, said: “I believe this is the largest study of its kind to date to evaluate the specific effects of yoghurt on blood pressure.”

The researchers suggest the beneficial effect of yoghurt on lowering the risk of high blood pressure, especially when consumed as part of a healthy diet.

The association between dairy consumption, particularly yoghurt and blood pressure may be explained by its nutrient content.

Yoghurt contains high concentrations of proteins, as well as calcium, magnesium, potassium and vitamin D, all of which have been linked to regulation of blood pressure.

During the fermentation process used to make yoghurt, biologically active peptides are formed and these too have been shown to promote blood pressure-lowering effects.