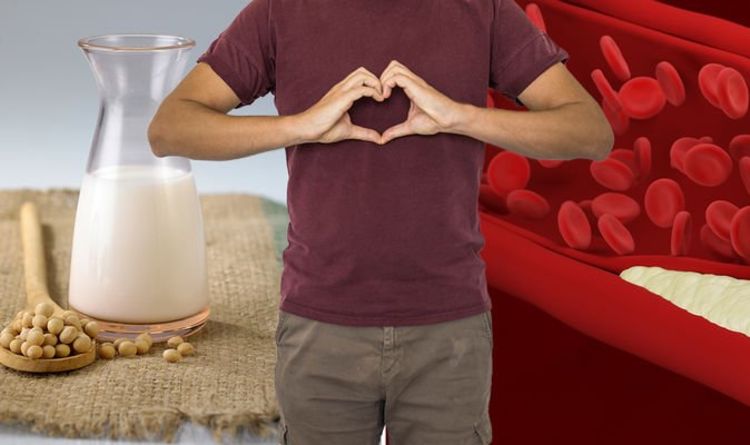 Eventually, your arteries may become blocked, starving the heart of blood and oxygen – conditions that trigger a heart attack.

When referring to cholesterol, it is important to distinguish between the different types because they each perform different roles.

HDL carries cholesterol from other parts of your body back to your liver where it flushed out of your body.

READ MORE: How to live longer: Sprinkle this spice on your meals to reduce risk of early death

Research has found that soy protein and isoflavones have powerful cholesterol-lowering effects and can reduce your risk of heart disease.

In fact, eating soy every day for at least one month can increase HDL cholesterol by 1.4 mg/dL and reduce “bad” LDL by about 4 mg/dL, research shows.

According to a meta-analysis, less processed forms of soy — such as soy milk — are likely more effective at lowering cholesterol than processed soy protein extracts or supplements.

While it is tempting to focus on certain items, for optimal benefits, it is vital that you commit to a heart-healthy diet to reduce high cholesterol.

“To reduce your cholesterol, try to cut down on fatty food, especially food that contains a type of fat called saturated fat,” advises the NHS.

“You can still have foods that contain a healthier type of fat called unsaturated fat,” notes the NHS.

In addition to eating well, exercise will help to lower high cholesterol.

With your doctor’s confirmation, work up to at least 30 minutes of exercise five times a week or vigorous aerobic activity for 20 minutes three times a week, the health body advises.

What’s more, adding physical activity, even in short intervals several times a day, can help you begin to lose weight, it adds.