Holby City spoilers: Jac and Kian to take their turbulent... 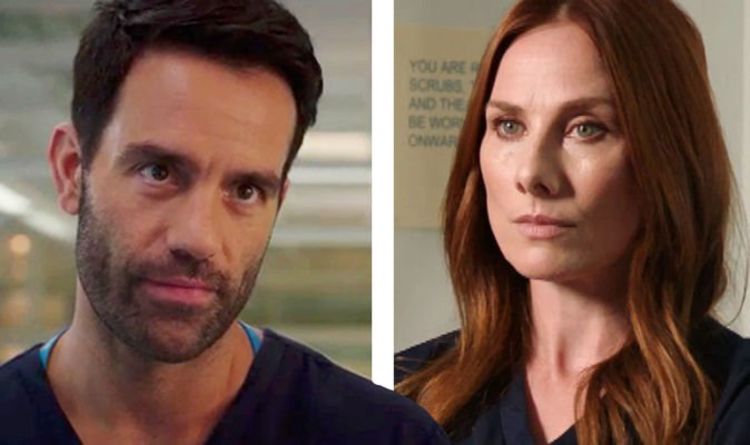 Holby City’s Jac Naylor (Rosie Marcel) and Kian Madani (Ramin Karimloo) embarked on a steamy romance a few weeks ago, after terrible events brought them closer together. Fans will remember last year when Jac suffered a breakdown following her declining mental health, which all came out when she was tasked with performing surgery on her pal Elliot Hope (Paul Bradley).

Meanwhile Kian had his own demons to contend with, following the loss of his partner Bea (Rosalind Halstead), who passed away from a heart condition in December after he performed an unauthorised surgery on her.

He contemplated suicide but Jac talked him down.

They both found comfort in each other as they went through one of the most difficult periods in their lives and soon their friendship blossomed into something much more intimate.

And while they kept their secret romance under wraps away from the prying eyes of the hospital, it was all cut short last month when Kian suddenly had to go back to Canada, standing Jac up in the process after they had arranged to go on an official date.

His mysterious disappearance left the frosty cardiothoracic surgeon seething that she had fallen for a co-worker so untrustworthy.

While his actions were inexcusable, Jac might be able to forgive him given all they’ve been through together.

It was revealed that he made his quick getaway after being haunted by Bea as he discovered one of his patients, Phoenix, is in fact her son.

His traumatising day led him to make the brash decision to up sticks and flee back to Canada for a break, not realising his actions would leave Jac in an awkward position.

But next week he’s back and there could be light at the end of the tunnel for the pair.

Left hospitalised from his injuries, will Jac be by his side when she learns what has happened?

Fans hope so as the two could have a promising future together!

And it’s been predicted that they could take the next step in their relationship and move in together before the year is out.

In exclusive odds shared with the Daily Star, bookmakers Betway have priced the odds of the pair becoming roomies at 11/10.